John Byrne is a name that’s synonymous with comics in general, and the X-Men in particular. And now his legendary work is getting an Artifact Edition from publisher IDW.

No, you’re not seeing things. This is IDW publishing Marvel stories. The two publishers have had an agreement for a while now, and its resulted in some memorable special edition tomes.

Beginning way back in 1977 with issue #108, Byrne worked with Chris Claremont and Terry Austin to craft the already popular X-Men into some of the biggest names in comics. 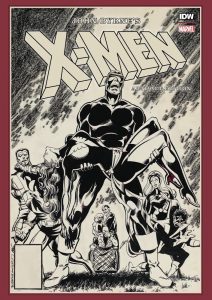 “Even after all these years, it’s the X-Men work I did with Chris and Terry that still resonates the most with fans.” said Byrne, “Hopefully when you all see the pages in this format you’ll still feel the same way!”

And it really is some format too. Artifact Editions are presented in 12″ x 17″ style, which matches the publisher’s Artist’s Edition size. Inside you’ll find over 100 pages of work, each page of which was scanned form the originals.

Artist’s Editions are not cheap however, and even though IDW hasn’t shared the MSRP on this one, it’s probably going to run over $100 USD. As you can see however, they’re pretty awesome sights to behold. So if you’re a big fan, then you might want to take a long look at this one.

Expect it in stores this coming July.

“It doesn’t get much bigger and better than John Byrne’s X-Men.” said award-winning Artist’s Edition Editor Scott Dunbier, “This truly will be an event, one absolutely not to be missed!”

Jason's been knee deep in videogames since he was but a lad. Cutting his teeth on the pixely glory that was the Atari 2600, he's been hack'n'slashing and shoot'em'uping ever since. Mainly an FPS and action guy, Jason enjoys the occasional well crafted title from every genre.
@jason_tas
Previous Warner Bros titles to be added to EA’s Origin PC gaming service
Next Looks like Toys R Us might be completely closing by next week