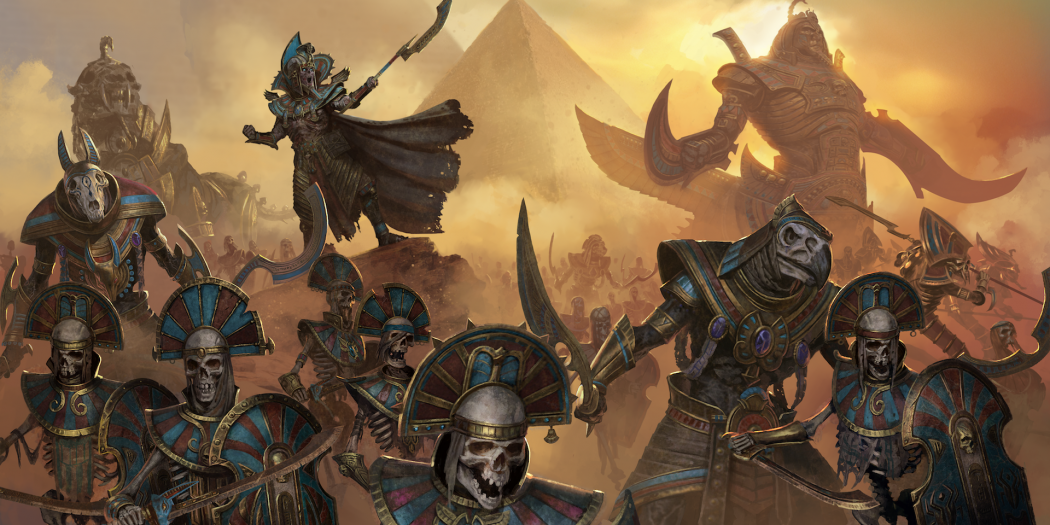 The desert sands give way to skeletal monstrosities set to rampage across the Old World. Rise of the Tomb Kings is here for Total War: Warhammer II.

The war in the sand

I think I found my new favorite Warhammer army. I also think it’s time to fire up Total War: Warhammer II again, cause man this looks great. It’s also available now, and has a bunch of content for RTS fans looking to dig into the sand.

Here’s what’s in it:

The Rise of the Tomb Kings Campaign Pack introduces an entirely fresh campaign experience with a raft of race-specific gameplay mechanics, victory objectives, and lashings of authentic lore. In battle, the Tomb Kings field countless skeletal units, supported by towering stone constructs such as the Tomb Scorpion, Necrosphinx and the colossal Hierotitan.

Playable in both the Eye of the Vortex and Mortal Empires campaigns, the Tomb Kings have their own specific victory conditions that focus on collecting the Nine Books of Nagash. With their own skills, traits, quest-chains, legendary wargear and situational challenges, players may embark on Tomb Kings campaigns as Settra the Imperishable, Khalida, Khatep and Nagash’s former lieutenant, the malignant Arkhan the Black.

But that’s not all

Also out today is a free content pack based on everybody’s favorite rat-men, the Skaven.

Also released today as a free addition is Skaven Legendary Lord Tretch Craventail, who is playable in both the Eye of the Vortex campaign as well as the Mortal Empires campaign. Few Skaven possess the cunning and guile of Tretch, and he empowers his underlings to fight harder as they return from every rout. Tretch begins play in Naggaroth, and is available as a free download via his own Steam page under the WARHAMMER II free content listings.

Jason's been knee deep in videogames since he was but a lad. Cutting his teeth on the pixely glory that was the Atari 2600, he's been hack'n'slashing and shoot'em'uping ever since. Mainly an FPS and action guy, Jason enjoys the occasional well crafted title from every genre.
@jason_tas
Previous Toy Fair 2018: Mezco kicks off set of reveals with Homecoming Spider-Man
Next One:12 Collective Deathstroke (Action Figure) Review