You bet that the fight will continue against the Nazi regime in Wolfenstein II’s post-launch downloadable content.

Roadmap to victory. Or DLC. Either way.

Of course there’ll be dlc for Wolfenstein II. Of course there will. You probably could have guessed as much, since this is a pretty big game and that’s just the way things are now. But actually, Bethesda actually announced that this was coming a while ago. If you’re unfamiliar though, it actually sounds like some cool stuff.

A trio of new heroes star in three new post-launch episodes for Wolf II, all of which sound cool. Each one will be available separately, or as a part of a collected pack. That’s been dubbed The Freedom Chronicles” by the way, and will run you $24.99 USD. 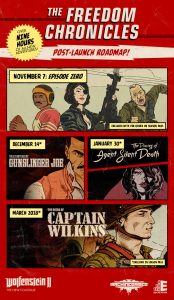 Here’s how it breaks down, including release dates:

Jason's been knee deep in videogames since he was but a lad. Cutting his teeth on the pixely glory that was the Atari 2600, he's been hack'n'slashing and shoot'em'uping ever since. Mainly an FPS and action guy, Jason enjoys the occasional well crafted title from every genre.
@jason_tas
Previous Yadda, yadda, yada, Seinfeld finally goes digital
Next Street Fighter gets literary in new novel from Udon