A fun, if short, old school-ish shooter hits the Nintendo Switch. The new revision of the already pretty great Sine Mora adds a game from a genre that Nintendo’s newest console was sorely lacking.

Sine of the times

It’s been a while since I’ve gotten into a really good, old school shooter. You know the kind, where a thousand “bullets” are thrown at you every few seconds, and you have to dart between them all. That’s kind of what I thought Sine Mora (and Sine Mora EX) was. And it kind of is, but it’s also kind of… not.

The biggest thing that surprised me when I fired this little gem up, was the aesthetic. I honestly don’t know what I had been looking at when the original Sine Mora released on consoles back in 2012. But whatever ideas I had about the game, well they’re just not correct.

For starters, Sine Mora isn’t really a bullet-hell shooter. Or, I should say, it doesn’t have to be. It’s got its moments even on ‘normal’ difficulty, totally it does, but it’s not the kind of unrelenting beast that I assumed. And that’s a good thing by the way, for me anyway. I’m not totally in love with that as a sub-genre of the shoot ’em up. 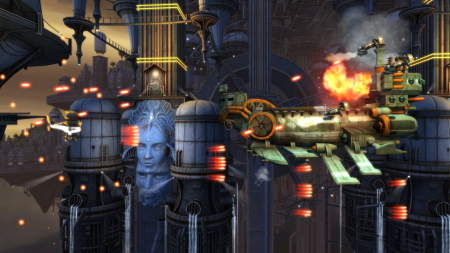 The game basically offers gamers the ability to play it in a more leisurely manner (the aforementioned Normal), though it does ramp up. There are multiple difficulty selections, each harder and tougher than the last. If I go back to this one in the future, it’ll be on Normal, though if you prefer complete insanity you’re covered there too.

As for the story, it’s pretty unique.

Endless war on an alien world

This definitely ain’t Earth. Though, you will recognize some of the forms that the cast of Sine Mora EX take. That’s due to them being modeled after Earth animals.

Yes, that might seem somewhat kiddish, and probably more than a bit cutesy. I totally get where you’re coming from if you’re thinking that right now. But here’s the thing, you’re wrong.

Though their forms might elicit a few smiles at first, this game is not -in any way- cute.

The story starts off with a rogue Empire locked a massive war with another city-state. Looking to strike a decisive blow, this unstoppable force delivers what looks like a nuclear strike on a major city. And it plays out pretty much every bit as serious as you’d think something like that would. 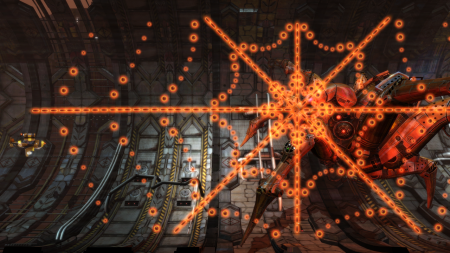 From there, we jump around a bit, with branching storylines and different sets of characters. We even move back and forth in time a bit, visiting similar locations and seeing identical moments from various perspectives.

Time is not just a major part of Sine Mora EX’ story either. It’s also a part of the title’s gameplay.

The world of Sine Mora is a complex one for a shooter, no doubt about that. And it defies convention in a few ways. Combat however, is fairly simple.

You fly your aircraft through linear levels, blasting at enemies in a 2D setting. At important moments or during boss fights, the game will often rotate things around to show off a three-dimensional battleground. You don’t actually fight in this manner though, it’s all 2D stuff.

Be that as it may, there is a neat little hook to the combat. And it’s all about time.

Both sides in the war that’s depicted in Sine Mora EX have mastered a kind of time-control. And yes, you have access to this element. So you can slow time to a limited degree, making dodging bullets all that much easier, while plugging away at foes. It comes across really well in-game, and allows players a cool little trick to keep up their collective sleeve. 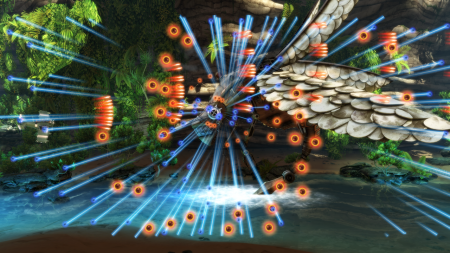 I found the sound to be only “okay” overall, and the music fairly forgettable. I will point out the voice acting, which is really nice. It’s odd to me to hear so much actual speech in a shooter like this, but there’s a ton of it, and most of it is great. And no worries, there are subtitles and almost all the lengthiest sections of exposition are skippable.

One thing that shocked me was the amount of “adult language” in the game. Yes, there’s cussing- lots of cussing. It’s not every other line, but there’s enough to make you take note. And I’m not talking about a few “hell”s and “damn”s either. I mean these guys and gals throw around the big boys of the cursing world.

It definitely lends to the game’s realism, but I will admit to being shocked to hear it. I mean, these are Bisons piloting airplanes. Foul language and adult topics aren’t really what you’d expect.

I also didn’t expect the graphics to be this good. Now, they’re not perfect, and I spotted a few scenes where the graphics were a little rough. Overall though, the game didn’t let me down. No, it’s not going to knock you over with astounding looks, but some of Sine Mora EX’ set pieces and bosses are awesome, and most of its levels are beautiful to behold. 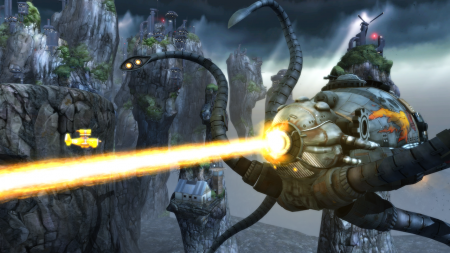 All of this mixes nicely, to create a game that’s got a very unique flair. And I’d be lying if I said I didn’t enjoy the hell out of it despite its flaws.

A surprising story and setting that delivers - 91%

Not the most consistent graphics, but good overall looks - 86%

Sine Mora EX is a revamp of the original Sine Mora from 2012. Never having played that version, I was pleasantly surprised (if a little shocked) by the mature storyline and characters. It's a shooter that's solid for every taste too, with multiple difficulty levels. Sure the graphics might be a little (and I mean a little) shaky in parts and the music might be bland, but the game succeeds in delivering a fun and replayable shooter experience.

Jason's been knee deep in videogames since he was but a lad. Cutting his teeth on the pixely glory that was the Atari 2600, he's been hack'n'slashing and shoot'em'uping ever since. Mainly an FPS and action guy, Jason enjoys the occasional well crafted title from every genre.
@jason_tas
Previous Sony announces 60+ games heading to PSVR platform
Next Star Wars Made Easy (Book) Review