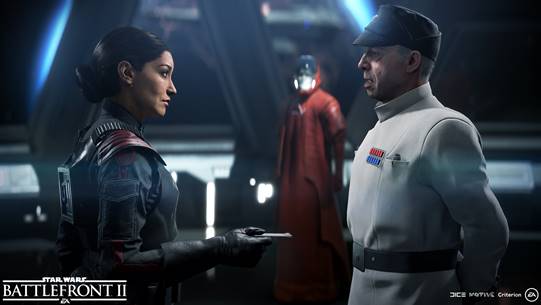 While the first of the new Star Wars: Battlefront games had no story at all, Battlefront II will be making it as important as the multiplayer.

There will be quite a bit of new content in Star Wars: Battlefront II, not the least of which will be the story mode. Centering on the Imperial side of the galactic conflict, players will take on the role of Iden Verso, and Imperial pilot and special ops soldier. And from the looks of things, it’s going to be pretty interesting.

As you can see, there’s a lot there. According to EA, Battlefront II will fill in many of the gaps between Return of the Jedi and The Force Awakens. To what extent, we don’t really know, but so far, so good. We’ll get to see new worlds in the Star Wars universe, as well as get to see the story from the Imperial side, which could be very interesting indeed.

I can’t think of much off the top of my head, that’s gotten into that angle. Actually, I can’t really think of anything, especially not in the modern continuity which eliminated the old Expanded Universe. Battlefront II should be worth checking out just for that.

Of course, there’s that multiplayer too, which should keep gamers playing long after the final shots of the campaign have played out. Watch for it on store shelves this fall.

Jason's been knee deep in videogames since he was but a lad. Cutting his teeth on the pixely glory that was the Atari 2600, he's been hack'n'slashing and shoot'em'uping ever since. Mainly an FPS and action guy, Jason enjoys the occasional well crafted title from every genre.
@jason_tas
Previous XSEED brings Ys 7 to PC this summer
Next Poe Stories and Poems (Graphic Novel) Review