“Berserk” is finally off the boat with volume 38, and the developments in the series’ story were well worth the wait. 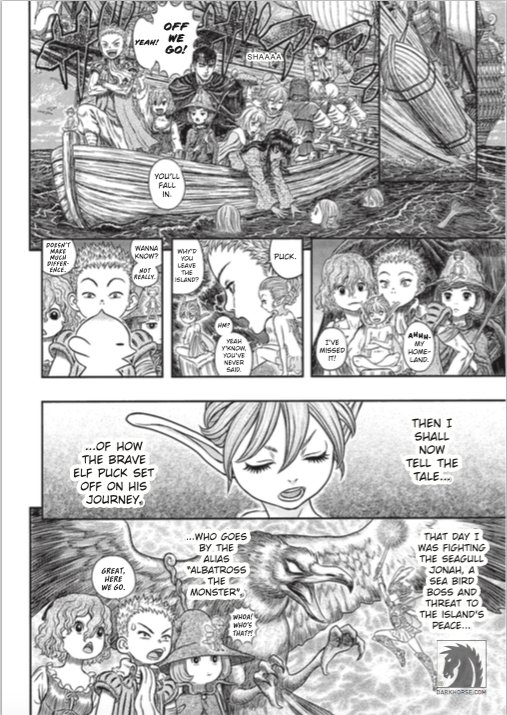 Yes, after what seemed like many years in the series – and was for those who kept up with the manga’s english releases – Guts’ party is finally off the boat and to the Fairy Kingdom. Upon their arrival though, not all is as it seems on this ancient island. There are no fairies to be found, and the party is soon set upon by ghastly figures who seek to tear them apart.

Meanwhile, Rickert and Erica have successfully reached the capitol of Falconia, Griffith’s new kingdom. The citizens enjoy a peace the rest of the world can only dream of, with the human and spirit world coexisting peacefully. Citizens can see their departed loved ones through Griffith’s powers, and the apostles who serve him act as an indomitable military force for the kingdom. Seeing all this, Rickert begins to question whether Griffith was right in the choices he made and if he should rebuild his friendship with his former commander.

Rickert’s moral struggles in Flaconia easily steal the spotlight, doing a fantastic job of toying with readers’ perception of Griffith and his actions. It paints a picture of the benefits of his rule for the people of the world, while simultaneously presenting the cost this took on Rickert, Guts and their friends. These dilemmas set up some much needed character development for Rickert leading into the next arc, establishing him as a character worth taking part in the longer narrative.

As always, Kentaro Miura’s art is some of the best around. Falconia and Skellig Island come alive with sweeping backdrops that spring right out of the page. Everything from the shadows cast by soldiers to the individual petals of a flower in the castle garden to waves lapping against a shore are drawn in painstaking detail, lending life to the world around each scene that plays out. Likewise, clothing and armor gleam and rustle thanks to impeccable shading, giving each interaction a sense of motion which carries scenes forward with an impressive flow. 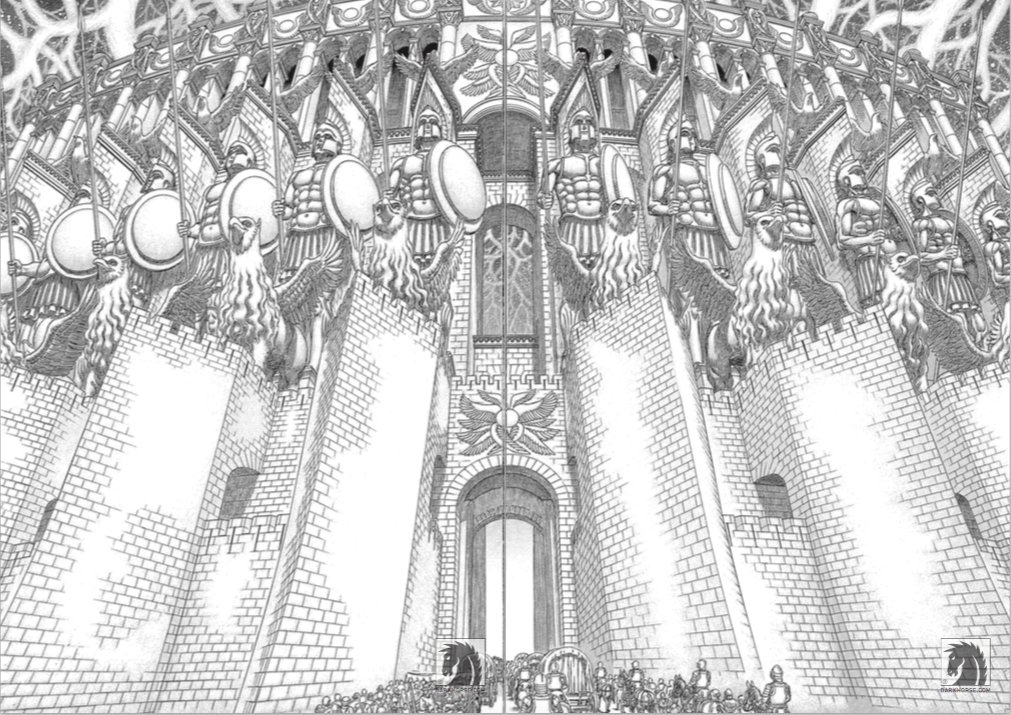 Character designs live up to this same standard, with facial details drawing readers further in with each panel. The way Rickerts’ eyes and face widen with horror when he sees apostles; the ear to ear smile on Isidro’s face when the party disembarks onto land; and the intense anger from Griffith’s subordinate Sir Locus toward Rickert all bring the interactions between the characters to life, making the story that much more engrossing and engaging.

After a long wait, “Berserk” volume 38 doesn’t disappoint with some stellar writing, character development and top of the line art. Here’s hoping it isn’t too long until the next volume is released.

After a long wait, "Berserk" volume 38 doesn't disappoint with some stellar writing, character development and top of the line art.

Keenan McCall is a journalist and writer with a passion for animation. From video games to anime, anything that sets art in motion will get him talking and writing nonstop.
Previous Episode 3: The S NES Classic and Gumby Returns
Next Nintendo Download: Have a Blast with Kirby