Call of Duty: Black Ops III is receiving the best possible DLC pack, if you’re a fan of the zombies gameplay, that is.

The pack, appropriately titled “Zombie Chronicles” promises to bring eight of the most beloved, popular and classic zombie packs from Call of Duty: World at War, Black Ops and Black Ops II. The press release for the pack mentions that players will be able to re-live the storyline from the origin of the zombie outbreaks. 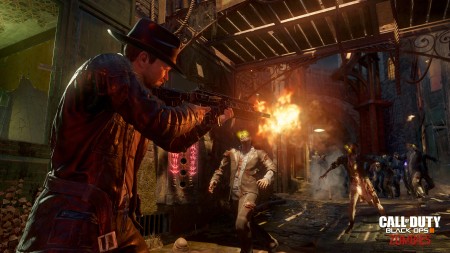 The release date kicks off an eight day celebration titled “8 Days of the Undead,” where players will be able to earn double experience, take part in community challenges, a new theme and more.

Zombies Chronicles is really about the community that made Zombies what it has become today,” said Jason Blundell, Co-Studio Head at Treyarch. “Together, we’ve been slaying the undead for nearly ten years, across different game consoles, and Zombies Chronicles is really about bringing all of those fans together. If you played these maps before on previous consoles, you’re getting a new, stunning and challenging experience – if it’s your first time, this is eight definitive experiences of our Zombies storyline, all in one place,” he said.

Erich was introduced to gaming by his grandfather before he could walk. Since then, he has grown up loving Nintendo and most games in general. He couples his love of videogames with journalism to cover news, provide reviews and tell it how it is in the gaming world.
Previous New english trailer for Ever Oasis RPG streamed
Next As Agents Of Mayhem: Meet The Franchise Force