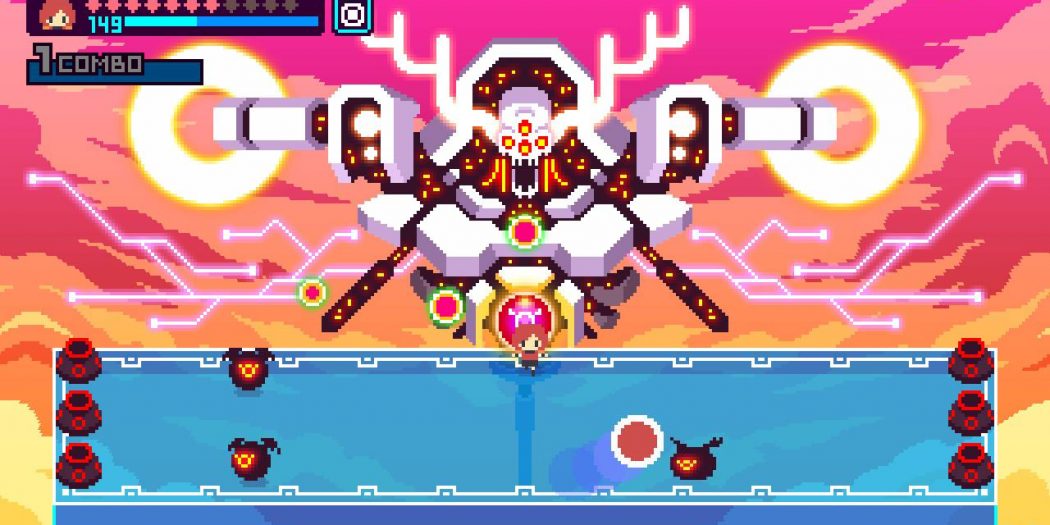 Five dollar action title Kamiko gives you your money’s worth. 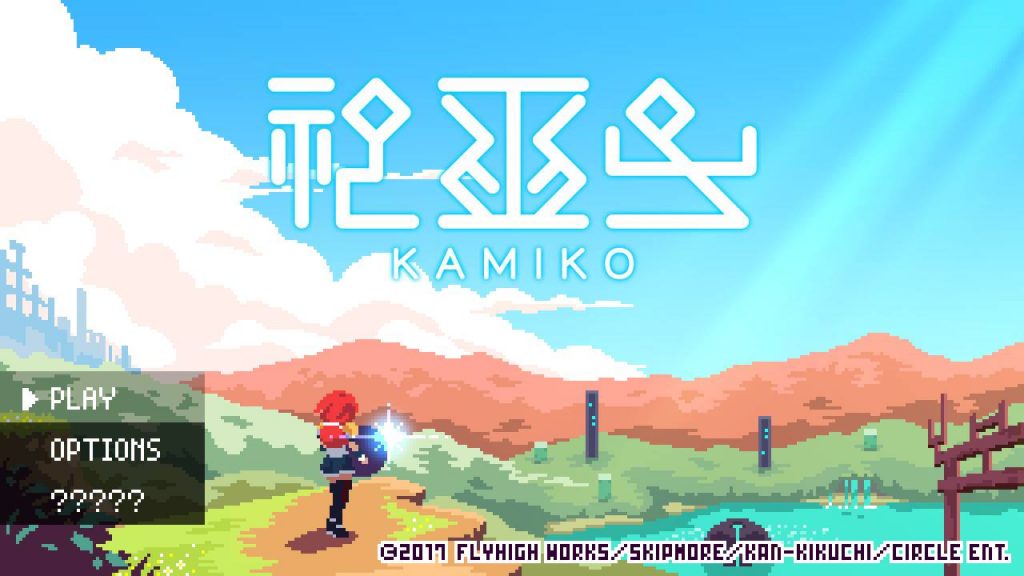 Home consoles aren’t generally the home for games designed to be played in short bursts, but then, the Nintendo Switch isn’t the typical home console.  Enter the eShop’s Kamiko: a clean, simple top-down action title with crisp, small sprites and quick stages.  A single sit-down will get you through the majority of what the game has to offer (my initial play-through clocked in at under an hour, and every play-through following only chopped off a dozen minutes at a time).  Each stage can be conquered in under ten minutes, which makes it an ideal game to take with you on the go.

It’s not every day you can actually do that with a home console game.

Of course, there are only four of them, which means that one train ride will finish off the whole experience. 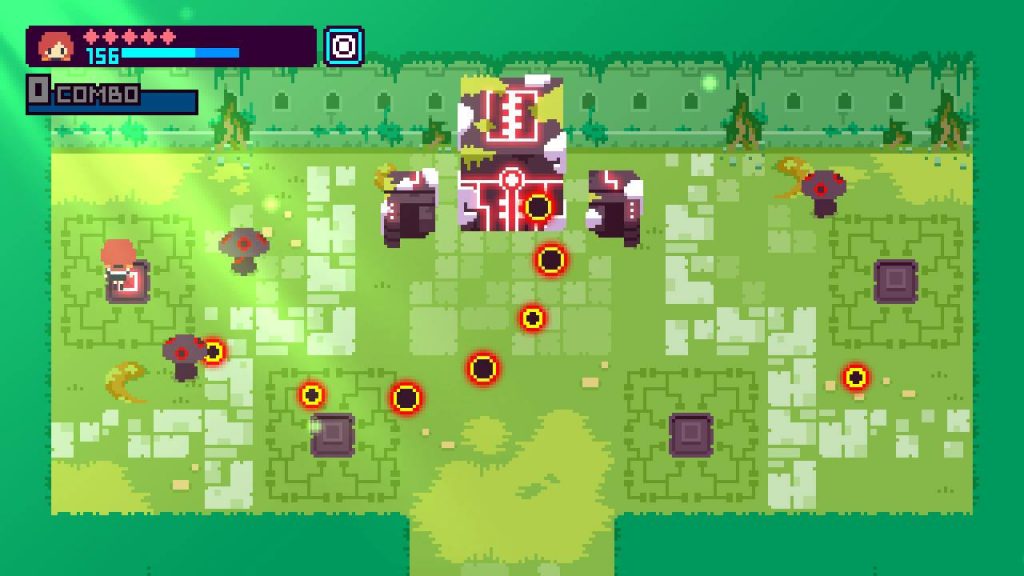 The brevity of Kamiko is complimented by its simplicity: combat involves a single attack button. Puzzle-solving is never puzzling. The game’s spawning enemies and hidden chests will attempt to slow you down (the former appearing often in your direct path), but offer no real challenge. The whole game is designed to be pounded through in as short a time as you can manage. It does, after all, keep track stage by stage of how quickly you’re making your progress. You’ll feel foolish if you take as many as seventeen minutes on a single stage (I know I did, when trying to figure out which hole to put the blue circle in during the first stage). And you’ll feel a lot more capable when you bring that time down to five.

The game will be over before it really starts to demand anything from you. Only in the final of the four stages do the enemy attack patterns start to noticeably differentiate (it was the first time I had to pay attention to the hits I was taking), but even the boss attack patterns, with their bullet-hell slant, fail to push you to get better. 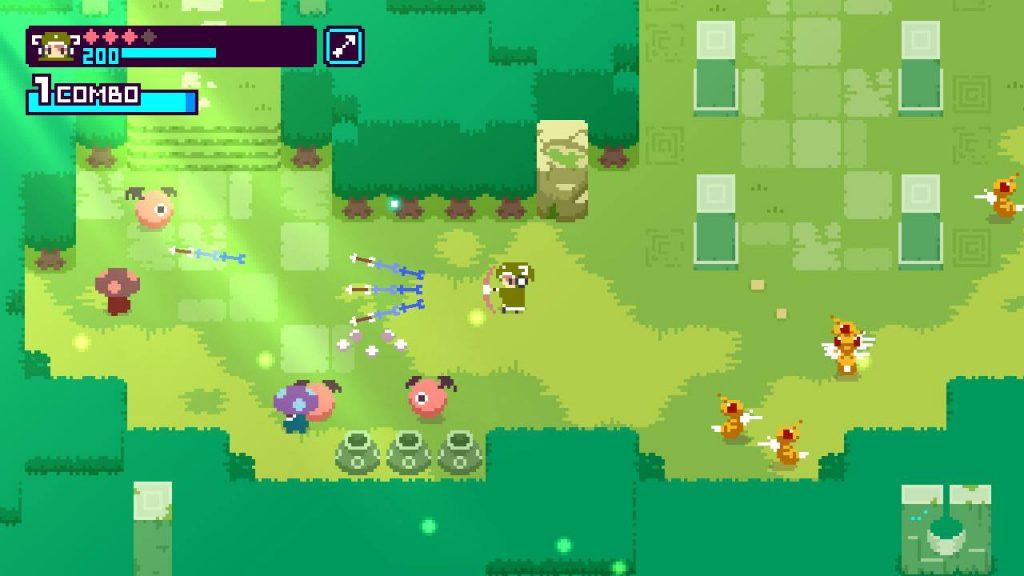 The only option is faster. Fortunately, Kamiko offers several playable characters to give you reason to replay, each one utilizing a different weapon with different strengths and weaknesses. Yamato uses a sword, whose melee strikes have limited range that put her in harms way. Uzume keeps her distance with a bow while sacrificing mobility, and Hinome (my personal favorite) uses a tiny dagger and a throw-able shield to bring the best of both worlds.

Each also has a charge move, which takes a moment to load up and expends your single resource (the aforementioned blue squares, earned by defeating enemies and at a higher rate during a higher combo chain, open doors, gates, and chests as well). I made do without using these moves at all until the final boss, which demanded it by design, as no enemy is so difficult and no encounter so populated as to require more than your basic attack. Their effect is generally the same (obliterate everything), but they make it happen in different ways.  Yamato executes a mobile, murdering sword spin; Uzume fires a collection of homing arrows; and Hinome sends her shield spiraling out to cut foes.

Kamiko’s setting and story is inspired by Shinto beliefs and Japanese mythology, but the Kusanagi and Mirror of Yata are only briefly name-dropped: there largely is no story besides you, the shrine maiden, saving the day. At least no cut-scenes will interrupt your speed-run.  Regardless, the environments look nice, and the enemies are cute in their simplicity.  Those looking for a story, or even a minor expanse of knowledge regarding the mythology, will need to look elsewhere.

Kamiko is a five-dollar package, and while it won’t last much longer than anything else that’ll cost you five dollars (like a cheeseburger), that’s kind of the point. It’s a short, simple game that you’ll aim to make shorter and simpler with every play through- if you’re the kind of person who’s down for that.

Clean sprites and cute enemies are easy on the eyes. - 75%

For simple action on a budget, Kamiko does no wrong. Just remember you'll be done in an hour if chasing a faster time with a different character isn't draw enough for you to revisit the same stages.

Brutal Gamer's Nintendo Editor began his gaming life a little late- at five years old. But he's made up for it in the two decades since, gaming and writing about gaming with the same passion, fervor, and unrelenting love as his five-year old self.
Previous First round of Injustice 2 DLC characters revealed
Next You’re going to want all of these Uniqlo Nintendo tees