The hunt looms in the first issue of “Predator: Hunters,” introducing characters and a plot which carry good potential. 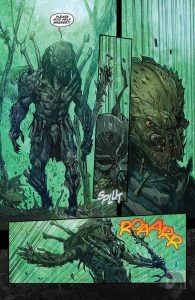 The story begins with three men fleeing from a Predator in the jungle. Two are killed, but one manages to reach a waterfall and jump off before it can cut him down. Believing him to be dead, the predator takes the heads of the ones he killed and disappears into the brush. Shortly after however, the man resurfaces from the water below.

The focus then shifts to Enoch Nakai, a man working at a roadside attraction in the American Southwest. He is approached by three strangers led by  woman named Jaya Soames who knows of his past accomplishments – namely, tracking down and killing a Predator which attacked the military base he was stationed at. They all have endured similar experiences and are looking to turn the tables against the predators, building a team of hunters to track and eliminate them. Nakai agrees, and the group sets off to begin their mission.

As far as first issues go, “Hunters” does a good job of introducing its cast and presenting a clear antagonist. In particular, bringing Nakai and other characters back after surviving other “Predator” comic series is a cool concept that hasn’t been explored much over the many years of comic runs in the franchise. It’s not a story that newcomers to the predator mythos will have an easy time diving into, but for those already up to speed it’s a novel concept that holds plenty of potential.

Author Chris Warner did a great job of getting the exposition out of the way early, providing readers with most of what they need to know quickly and concisely. Each of the characters are introduced smoothly and given the necessary motivations to join the hunt, with Nakai being presented as the reader’s main perspective. Other characters offer their own interesting story arcs as well, Jaya Soames in particular. Carrying on a generations old war against the predators, she has a stake in the hunt not usually seen in any “Predator” story line. It’s a strong evolution from the usual “fighting to survive” mentality most every character has had in the past and presents some cool new opportunities for future issues.

All that said, the dialogue can get groan worthy at times, specifically with racist exchanges between characters that feel forced or even nonsensical at times. Even if it is set in the Southwest, it’s confusing for a character to suddenly remark “Remember the Alamo” to the native american character Nakai. It doesn’t serve any other purpose than to set up a quick conflict between him and other characters, and otherwise doesn’t do anything for building the characters up. 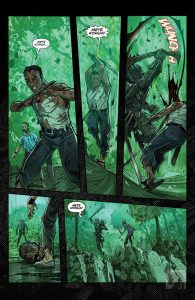 The art by Francisco Ruiz Velasco is fluid and has a clear sense of motion to it, depicting good action scenes and movement throughout. Each character has a nice division of color pallets devoted to their flashbacks, serving to build upon how their experiences play into their involvement. Nakai, who tracked and hunted down a predator, has flashbacks set to earthy and natural tones; Soames, who learned of hunting predators from old stories passed through her family, sees flashbacks in a reminiscent sepia filter. It’s a cool effect that distinguishes characters from one another, and it would be awesome to see this style carry on through the series.

Predators are also drawn with both traditional and new designs, building on their culture and aesthetic. The predator introduced at the start of this issue is clad in more bones and trophies than others, giving an intriguing horror element to its design.

The first issue of “Predator: Hunters” was a good start, if a little flawed in terms of dialogue. The series is set for a five issue run and there’s plenty of fun and interesting places it could go from here.

"Predator: Hunters #1" is a good introduction to what could be a fun and entertaining series.

Keenan McCall is a journalist and writer with a passion for animation. From video games to anime, anything that sets art in motion will get him talking and writing nonstop.
Previous Wizard World Supports Free Comic Day
Next Nioh DLC Dragon of the North drops May 2