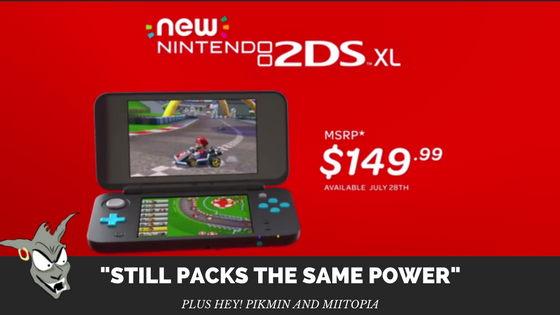 Nintendo has confirmed that there will be a New Nintendo 2DS XL on its way in the coming months. 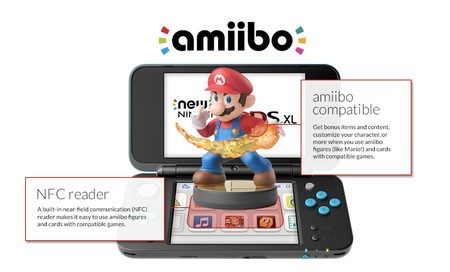 The new model features a clamshell design, including a c-stick and a built-in NFC reader for Amiibo functionality. The screen size is the same as the already released New Nintendo 3DS XL (February 13, 2015). It is lighter but Nintendo says It “still packs the same power” of the New Nintendo 3DS XL.

The Nintendo 2DS currently sells for $80 USD after being marked down twice. Marketed to kids 7 and under, it was built without the clamshell design and a more rugged material so that kids won’t snap the DS in half. Built like a door stopper in was and still is a good device.

Nintendo of America President Reggie Fils-Aime said in a press release that “this new addition to Nintendo’s portable hardware line demonstrates our commitment to the hand-held market,” and continuing on that a “New Nintendo 2DS XL sports a beautiful clamshell design and offers a great balance between price and performance.”

It’s About the Games

It will be released with two different colors. A black/turquoise color in the US and in japan will be getting a white/orange version. Also, coming out with the release of the New Nintendo 2DS XL is Hey! PIKMIN and Miitopia.

Hey! PIKMIN is a puzzle adventure game where “players guide Captain Olimar through 2D side-scrolling levels and collect Sparklium to refuel his crashed ship, the S.S. Dolphin 2, so he can escape the planet.” Miitopia is an RPG-like adventure game where you can “cast Mii characters into various roles and watch hilarious scenes unfold as they work together to defeat the Dark Lord who has stolen the faces of townspeople of Miitopia.”

Nintendo is known for their games and after reading all the articles in the past week that they should drop the DS line and solely focus on the Switch, I’m glad to see there not backing down. Yes the Wii U is over but thousands of Nintendo fans are loyal to their DS. Nintendo has stated several times that they consider the Switch a “console” and its meant to be. Two different experience’s, two ways to play.

Let me know if you’re interested in the DS family in the comments down below or @dylanslegos!

Dylan is a writer, gamer, avid movie lover, and PlayStation extraordinaire. Currently, he attends Radford University in pursuit of a BS in Media Studies with a concentration in Journalism. When he’s not writing the next epic post (but you know he is), he plays games like Destiny, Uncharted, Wolfenstein/DOOM/Dishonored; long story short: If I played the game, I liked it; if I haven't played it, just remember that I'm in college.
@Dylanslegos
Previous PS Plus: Free Games for May 2017 is Better Than We Thought
Next You Can Play the First Hour of Prey Right Now