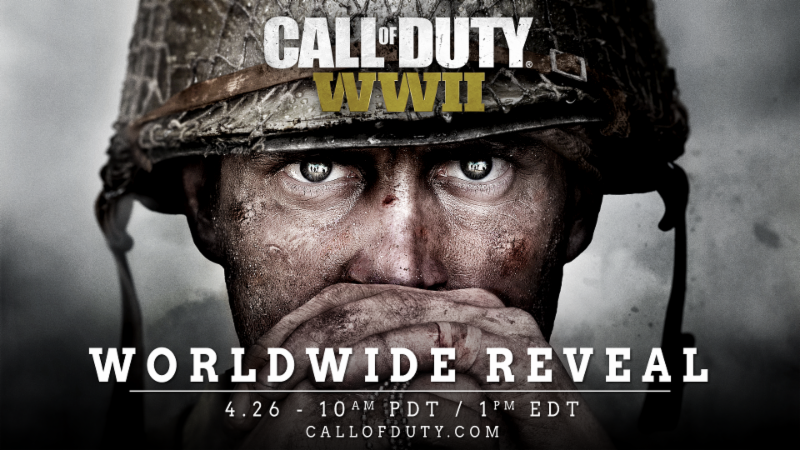 Yep, it’s official. Activision has revealed that the future is a thing of the past for Call of Duty. The next game in the FPS series will be Call of Duty: WWII.

If you’re a long time CoD fan, then you’re well aware that the series got its start in WWII. Those first games in Call of Duty were pretty amazing too, expanding what most gamers had come to expect from an FPS. That’s especially true when you take into consideration the specifically WWII-themed competition at the time, which was good, but not great.

There are some vocal CoD players too, who’d maintain that the series has fared worse the further it’s gotten from its origin. Personally, I’m not in that group, since I liked a few of the future-CoDs just fine. Still though, the thought is out there, and apparently has been heard loud and clear. That’s because, after years of expanding and growing and moving through multiple time periods, CoD is going back to the era that made it famous.

A full reveal is set for next week, on April 26th, but we can tell you a few things about the game right now. For starters, it’s called Call of Duty: WWII, which tells you quite a bit in its simplicity. Second? It’s being developed by Sledgehammer Games, and co-producers Michael Condrey and Glen Schofield will be hosting next week’s event via a live-stream.

And that stream won’t be just talk either. Activision says that gamers will indeed get a look at the title, and hear what Sledgehammer has in store. So it should be fairly eventful. We’ll have a breakdown of the news here, so make sure you check in for that. You’ll also be able to catch it on CoD’s site however, as it happens.

Jason's been knee deep in videogames since he was but a lad. Cutting his teeth on the pixely glory that was the Atari 2600, he's been hack'n'slashing and shoot'em'uping ever since. Mainly an FPS and action guy, Jason enjoys the occasional well crafted title from every genre.
@jason_tas
Previous Super Bomberman R Patch Delivers New Maps and Wanted Changes
Next Bandai Namco introduces its blood-soaked action/RPG Code Vein