Hellboy has been through a great many things, rarely do we see aboard a boat. Let alone a ghost ship. See what monsters he faces in HELLBOY: INTO THE SILENT SEA.

When Hellboy: Into The Silent Sea opens, we first find Hellboy departing island in a small one-person sailboat. We are not sure where he has been, or where is is going. Only that he is getting away. At least, trying to. A fog rolls in, and from the thick cloudscape emerges a schooner, with the sails all stowed away in effort to survive any storms. 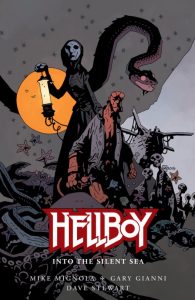 The scene fades black, and before we know it, Hellboy is aboard the craft, though chained to the main mast. Ropes around his chest, and arms restrained above him. The captain of the ship is telling his men that they have found a circus-worthy creature, they only have to get him back to civilization, when of his men preaches doomsday at the sight of Hellboy.

The captain shoots his man dead, and orders his men below. Hellboy and the captain discuss when they are, and Hellboy recounts some of the stranger places he has been in recent days. Once night falls, a young boy comes to Hellboy’s aid with some water to keep him alive.

This young boy, William, tells Hellboy about how the captain is not really the authority on the ship. There is a mysterious woman who the captain answers to. While down below, the men all trade theories about who or what Hellboy is. Just then the mysterious woman appears. Cloaked in all black with black hair, pale white skin washed free of color, supporting herself with a cane.

This woman discounts the men’s claims of Hellboy being a devil, sharing that there is no room for myths or devils in modern thought. Clearly there is another explanation. She offers to unchain our hero, and recants stories of her and her compatriots in the Heliopic Brotherhood over the years. Exposing myths for truths. Learning from things such as seances and the like.

The woman speaks of knowledge being a great power, and how she plans to summon and learn from an ancient serpent. Hellboy tries to get her to see the error of her ways, even as she rambles on about her beliefs.

Below deck, there is a strange green skinned corpse that comes back to ‘life’, hole in his head and all. He awakes and begins to attack those in his way. He seeks to find this woman in charge. This strange man is strangely strong, fighting off all who seek to restrain him. They must unleash Hellboy in order to save themselves.

No sooner does Hellboy throw the man overboard, do they hear strange sounds coming from the sea. The woman claims it is the serpent she seeks. Their ship runs aground, and no one seems to be worse for wear. Then they see that there are giant sea creatures climbing aboard.

Lobsters, crabs, and all mackes of unpleasantness find themselves aboard the ship, devouring anything that gets in their way. Hellboy requires a broken mast used like a baseball bat in order to keep them all at bay. The green skin man even finds his way back aboard.

The woman in black lights a strange beacon attached to the ship, and an even stranger, harrowing howl arises from the deep. Heca Emen Raa, serpent from the beginning of the world emerges from the water.

The woman believes that this creature will empart great knowledge to her, while Hellboy tries to tell her she is mistaken. Only when it is too late, does she see the error in her ways. The serpent devours her, and disappears as quickly as it appeared. Then all the fauna of sea creatures follow, and disappear.

Hellboy and William begin to discuss how things could have been worse. When he calls out to the men standing by the rail for their opinion, he sees that everyone on board is crumbling into extinction. Every man, child and even dog on board has turned to skeleton. Then Hellboy begins to dissolve away as well.

Hellboy awakes back on his small sailboat, thinking he has had one whirl of a bad dream. When he looks to see where he is, he finds himself facing a shipwrecked vessel named Rebecca. The same ship that appeared in his dream. This ship appears to have been there for some time. Hellboy turns the ship around, and puts ‘whatever that was’ behind him.

Hellboy and his adventures are always worth a read. Whether fighting demons, hordes of nazis, or just watching as others duke it out, who doesn’t love the colorful character? We never really get an answer as to what it was that was summoned. Or what happened aboard the Rebecca. It has the making of a strange drug-induced hallucination. Though only certain details would make sense. This truly is an ‘answer for yourself’ situation: what happened aboard the Rebecca?

HELLBOY: INTO THE SILENT SEA

Mike Mignola's Hellboy stories are always something to look forward to. You never know who or what he will face off against. This time our favorite crimson investigator was just a bystander, but it was still an incredible ride.

A fan of media on multiple platforms, I am always watching or playing something! Who knows what I will be on to next?
@mackeyp42
Previous Generation X #1 (Comics) Preview
Next Get a first look at the larger than life gameplay for Micro Machines World Series