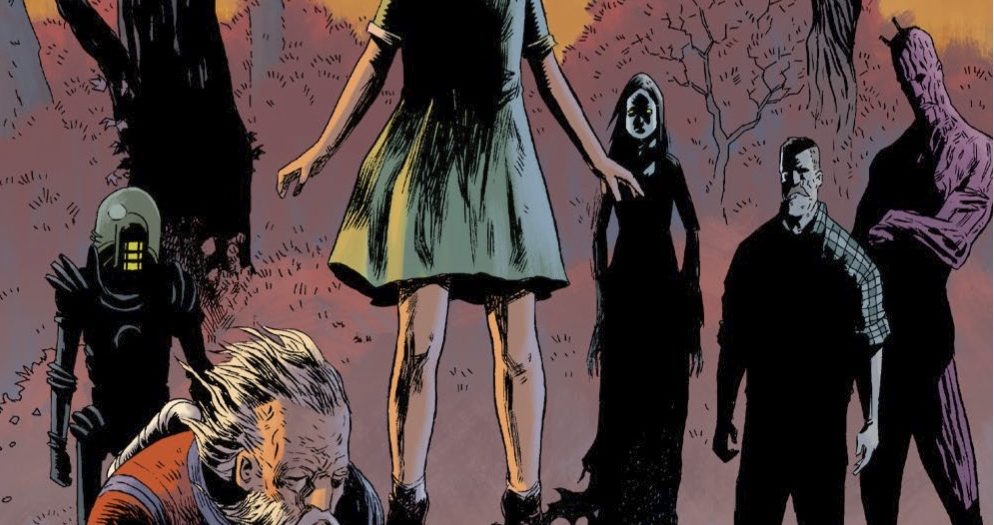 “Black Hammer Volume One: Secret Origins” isn’t a collection of a traditional super hero comic series, and that’s exactly why it works as well as it does.

Set 10 years after a climactic battle with a villain out to destroy earth, the story follows the six heroes who survived the battle. They’re a diverse lot that includes Abraham Slam, Golden Gail, Barbalien, Colonel Weird, his robot partner Talkie Walkie and Madame Dragonfly. Following their fight, they found themselves trapped in a small town by some mysterious cosmic force. With no way of escaping, they have done their best to adapt to their new life together, but some have found it easier to move on than others.

This opening arch sets up the series; not as a grand adventure with larger than life heroes, but as people coming to terms with the hands they’ve been dealt. Their lives of crime fighting are done. And the only choice they have is to hang up their costumes and settle into a world that even their super-powers can’t get them out of.

It’s a little bleak and a slow burn at first, but it’s a great way of humanizing Black Hammer’s super heroes. And at the same time, it’s a pretty impressive celebration of golden age comics.

Deep characters that are a joy to read

Speaking of which, “Secret Origins” provides some of the best first impressions for its characters you could ask for. Every issue paints a clear picture of each hero and the demons they wrestle with.

Abraham is an powerless old hero looking to move past his younger days of vigilantism. He also views himself as caretaker for his former teammates. Gail loathes her unending childhood caused by her powers. She copes by doing anything and everything that will draw shock from the adults around her. Barbalien is an alien from Mars, isolated time and again. That’s not just for how he looks, but also who he is as a person. Then there’s Colonel Weird, who clings to the group after nearly being lost to the space in-between dimensions. And finally, we get to Madame Dragonfly. She struggles to get closer to her new family, after centuries of betrayal and loss.

It is these characters, the perfectly imperfect representations of classic heroes like Captain America, Batman or Martian Manhunter, that set the comic apart. In one issue in particular, they feel more real than dozens of other super heroes before them. It’s no small feat that script writer Jeff Lemire has pulled off. And there’s still plenty of room for him to grow and expand these characters.

The art and the style of a world lost in time

The art is an interesting mix of new and old styles, with clear inspirations from popular series of old. The covers and flash back sequences in fact, look like something straight out of the ’60s or ’70s. On the flip side, the scenes in present day add a rougher and more detailed aesthetic more common in recent decades.

While it may throw off fans of modern day superhero comic art styles, it lends nicely to the overall themes of the story and helps the characters stand out even more. Character designs themselves are detailed enough, though the facial expressions can seem a little static at times.

The lettering is all done quite well, lending a nice ghostly touch to Colonel Weird’s dialogue in particular. The backgrounds also deserve attention, with detail and color in spades.

Book pages, cracks and creases in wood and fabrics all have good texture and detail to them, helping to draw you further into the story. Not only that, but they lend a nice ambiance to story moments with masterful colors and shading.

Flashbacks have a light and happy tone however, while current day scenes see muted and feature ‘quiet’ colors. Dean Ormston, Todd Klein and Dave Stewart all did exceptional jobs. Their work makes the comic as a whole all that much more enjoyable.

It’s not the kind of comic that’s perfect for everyone, but “Black Hammer Volume One: Secret Origins” is a perfect example of how to start a series that looks to deconstruct the superhero comic genre. If you’re a fan of superheroes looking for a new twist on classic tropes, this is a series you can’t miss.

You won't be able to drop this Hammer

"Black Hammer" is a super hero comic you won't want to miss, and "Volume One: Secret Origins" is a great way to start the series.

Keenan McCall is a journalist and writer with a passion for animation. From video games to anime, anything that sets art in motion will get him talking and writing nonstop.
Previous The Walking Dead The New Frontier – Episode 3 – Above the Law (PC) Review
Next Check out transhuman punk Anarki in new Quake Champions trailer