Last time, we ended with Team Flash imprisoned on Earth-2. Gorilla Grodd pit Flash against Solovar, leader of Gorilla kind.. Find out what happens in The Flash Attack on Central City.

At the end of the last episode, we see that Grodd has Gypsy captive, so that he will have someone to open portals for him. This certainly means danger. 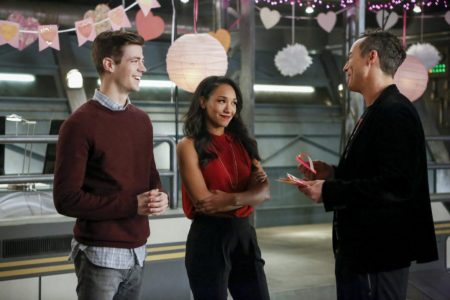 We cut to Barry suprising Iris with an intense breakfast, the whole loft is decorated with hearts and flowers. If we did not know better, one would think this was a valentine’s or birthday celebration. Along those lines, we see HR decorating the entire speed lab in lanterns, lights hearts and more in what he is deeming ‘Friend’s Day’, Earth-2’s equivalent to Valentines, complete with cards for all in attendance. They are having quite a celebration after what the believe to be a victory over Gorilla Grodd on Earth-2.

Jesse Quick comes clean to Harrison about moving to Earth-1 with Wally. Harrison accepts the news much like a business decision: with minimal feeling, and says “don’t screw this up.” Cisco and Caitlin are discussing dating stories, when Gypsy shows up and throws a wrinkle into everyone’s day. Just when it looks like the team is about to revisit Earth-2, someone hits Gypsy with a sneak attack from the back.

They get Gypsy contained, and she tells us about hunting a traveler on Earth-2 before everything went fuzzy. If Gypsy is back, that means she led the way for Grodd and his forces as well. Welcome to Rise of the Planet of the Apes.

The team determines that if they can vibe how the attack happens, then they can plan around it. However this will require Harrison to tweak Cisco’s vibe gear.  While working on Cisco’s gear, Wally and Harrison discuss the details of Jesse moving, and we learn that Harrison is not as well as he once was.

Once Cisco vibes into the near future and sees a location, the gang sets up for a pre-emptive strike. This does not go as planned, as Grodd is able to control Joe West, and issue additional threats to Barry and his team. So where is Grodd really going to begin his assault? He knew how to choose his targets for efficiency. Taking out a high-ranking military general will definitely give him plenty of freedom to bring peace (or in this case, chaos) to Earth-1, with little resistance. 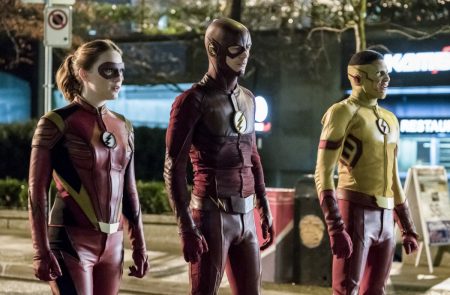 Harrison comes up with a plan to view Grodd’s memories by accessing Joe’s memory banks. Meanwhile, Barry comes to consider that some instances must be finished with taking a life. As well as how taking Grodd out of the equation will affect the Savitar future. Wells offers some advice that taking Grodd’s life will not ultimately be the answer that Barry seeks. He must keep looking for another way.

Jesse calls out Harrison for what he says to Cisco, stating that she is moving, regardless of him. Apparently Wells is not a fan of the idea of her moving. Grodd’s memories show the face of the general that he chose, though without any identifying uniform. The race against time continues. We learn that Grodd plans on using nuclear weapons to wipe out not Central City, but all of human civilization on Earth-1.

The team has a plan, and it is a doozy. Cisco runs off to appeal to Gypsy. It’s going to take some serious vibing to do what they have in mind. Though first thing is first, they need to recruit a gorilla. But not just any gorilla. They have to bring Solovar back into the fight. Solovar was the leader of the gorillas, and if he can overthrow Grodd, Earth-1 (and hopefully Earth-2 as well) will be a better place for it.

Watch Flash to find out how this last battle goes down, and who shows up in the end. You can catch The Flash on the CW network Tuesday nights at 8pm est/ 7pm cst.

I have said before that not everything can be fixed with just speed. And Attack on Central City plays to that. Even with three speedsters taking on the gorilla army, it takes the skills of a different side of Team Flash to take down the threat. I love the writers for this. So often do they try to keep a series all about the main character. Cisco and Caitlin are still growing, while Wally is learning to step up. The Flash is definately building up to something big. Only time will tell how that plays out.

A fan of media on multiple platforms, I am always watching or playing something! Who knows what I will be on to next?
@mackeyp42
Previous Bulletstorm: Full Clip Edition goes all out action in new trailer
Next Save The World From Dr. H8 In 88 Heroes