Last time, we ended with Jesse Quick jumping through a portal, finding Wally West. Gorilla Grodd has Jesse’s Wells kidnapped, in Gorilla City. Find out what happens in The Flash Attack on Gorilla City. 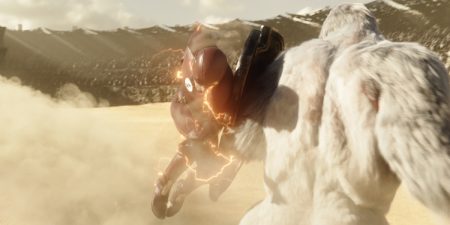 Harrison Wells went deep into Africa, to Gorilla City. They recieved an encoded message that took some serious effort to crack. Once they figured it out, it was an invitation. Though an invitation to what?

After failing to reach checkpoints, a rescue team was sent in after them. The teams’ findings were not positive. Though there is yet any sign of Wells himself. Barry suspects that the gorillas need Wells, though that leaves a lot yet unexplained.

Barry is still focusing on the future, and what will affect it. There was a headline involving a gorilla attack. If the team can rescue Harry, then they may be that much closer to changing the timeline, and disrupting the future that Barry has seen. One way or another, the speedster has his mind made up. This leads to a cascade effect bringing along several of Team Flash along with him. Though leaving Jesse behind with Wally seems like an uncomfortable situation just waiting to unfold.

With mixed feelings of rescue and adventure, Caitlin, Cisco, Julian and Barry set off to Earth-2 Africa. The team has to explain to Julian how saving someone on an alternate Earth can ward off an attack on their Earth.

Wally is trying to figure out his position with Jesse, when they get a call about a robbery. Speedsters to the rescue. We see why Jesse may be tense with Wally, as his ego has become quite inflated at becoming the hero.

Meanwhile on Earth-2, the gang are wandering around the African jungle in search of the kidnapping gorillas or Harrison. Barry realizes they are being led into a trap, right as they are hit by tranquilizer darts. 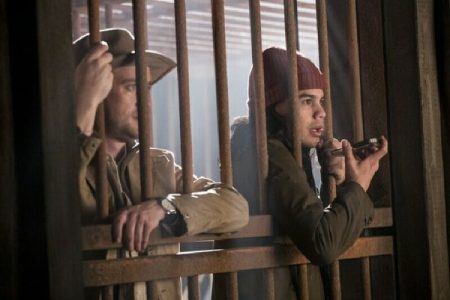 The gang is held in jail cells, unable to use their powers, and met by the man they seek, Harrison Wells. Only, he’s not exactly who he seems: Grodd is controlling him, for the purpose of approaching Flash.

Despite our assumptions, Gorilla Grodd is not the leader of the gorillas on Earth-2. And while he may be responsible for Wells’ abduction, his reasoning makes sense. Request Flash to take on Solovar, the ruler of Gorilla kind. When Flash defeats Solovar, the crisis of a gorilla invasion can be avoided.

Wally confronts Jesse about her being so cold to him. She opens up about her vulnerability and not hearing from Wally. Now that he has powers of his own, she feels like she doesn’t mean as much to him. Wally wants Jesse to stay with him on Earth-1.

Solovar approaches his detainees, enquiring their reason for trespassing on his Earth. He has seen interspecies violence on his Earth, and believe Team Flash is there to cause more problems. He aims to make an example of Team Flash in the arena, as a statement to his followers. Barry issues a challenge of a one-on-one combat, to win the freedom of his team.

The battle seems one-sided, with Solovar able to defend against Barry’s methods. Cisco and Caitlin are at a loss for words, when Julian mentions something that sparks an idea. Barry uses Julian’s words to find a way to triumph, and spare the gorilla leader. This does not make Grodd happy.

Team Flash awakes, back in their cages, despite Barry winning the challenge. Harrison arises, only to inform them of Grodd’s double-cross. The gorillas are now afraid of humans, and Grodd plans on taking back his home of Earth-1.

Amidst somber discussions, the team comes to the conclusion that someone must die in order to prevent Grodd’s plan. But how? Grodd is smarter than the typical gorilla. They figure out a way to get out of their pens, and back to their Earth. So now where does that leave them, with the gorilla invasion? Well, as to be expected, Grodd has a trick up his sleeve. Barry and his friends will see Grodd again soon, and he will definately not be alone.

Sadly, this is a perfect example that even if we do things for the right reasons, we can be drawn into unfavorable situations. Barry is truly a beacon of light, being the best that he can be. However, Grodd is playing the team like a chess board. There is going to need to be some strong work from Team Flash to stop the gorilla invasion, or Earth-1 is in serious trouble. How will they pull this off?

A fan of media on multiple platforms, I am always watching or playing something! Who knows what I will be on to next?
@mackeyp42
Previous Rise & Shine (Xbox One) Review
Next Toy Fair 17: Mega Construx shows off new TMNT, Halo and more