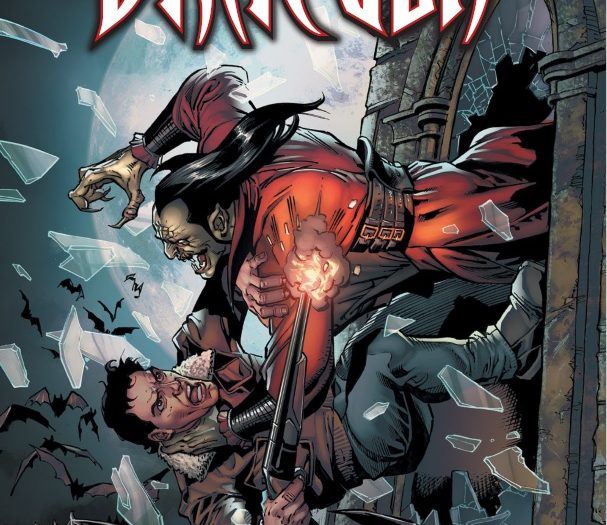 Ash meets a girl, travels the world and takes on Count Dracula in Evil Dead 2: Revenge of Dracula. 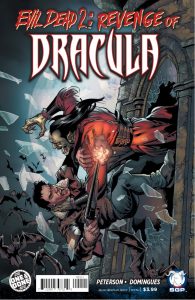 If you’ve been following us, we’ve been covering Ash’s encounters with some legendary figures. Now he is facing one of the biggest baddies yet: Dracula. The story starts like most Evil Dead scenes. Ash meets a pretty girl in a bar, Ash puts the moves on pretty girl, pretty girl knocks out Ash. Pretty girl steals Ash’s Necronomicon. This is pretty standard fare for Mr. Williams these days.
Ash follows the pretty girl to a remote location called Cluj-Napoca. He figures out a way to make a few bucks while he’s trying to track down the girl. Ash finds the girl in the dungeon of an old castle. (Of course he does.) Well, can you imagine what Ash’s pretty girl is up to in said dungeon? She is raising Dracula with the help of the Necronomicon.

As nothing ever goes right when the Ex-Mortis is involved, that’s precisely what happens next. Dracula steals the Ex-Mortis from the pretty girl, only to be confronted by Ash. Though before anything else can happen, Dracula is distracted by something. But what could scare an immortal vampire, let alone one such as Dracula?

There’s always something bigger and badder around the corner. Dabbling with the Necronomicon is not a good idea, regardless of who you are. Ash’s pretty girl got more than she bargained for when she got her hands on that book. Lucky for her, Ash is a sucker for a pretty girl.

Scott Peterson really seems to have Ash down here. Brave to a fault, easily duped by a skirt. This particular book ends with a question mark, so who knows if Peterson will revive his story in future books. There is certainly an audience.

Sink your teeth into Evil Dead 2: Revenge of Dracula at your local comic book establishment. You won’t be disappointed.

Evil Dead 2: Revenge of Dracula is brought to you by Space Goat Publishing.

Ash has run into more than his fair share of baddies, but Dracula is one of the biggest. Or is he? Check out how things play out in Cluj-Napoca.

A fan of media on multiple platforms, I am always watching or playing something! Who knows what I will be on to next?
@mackeyp42
Previous The new Zelda might miss the Switch’s launch
Next Daredevil expands with three new series’ in 2017