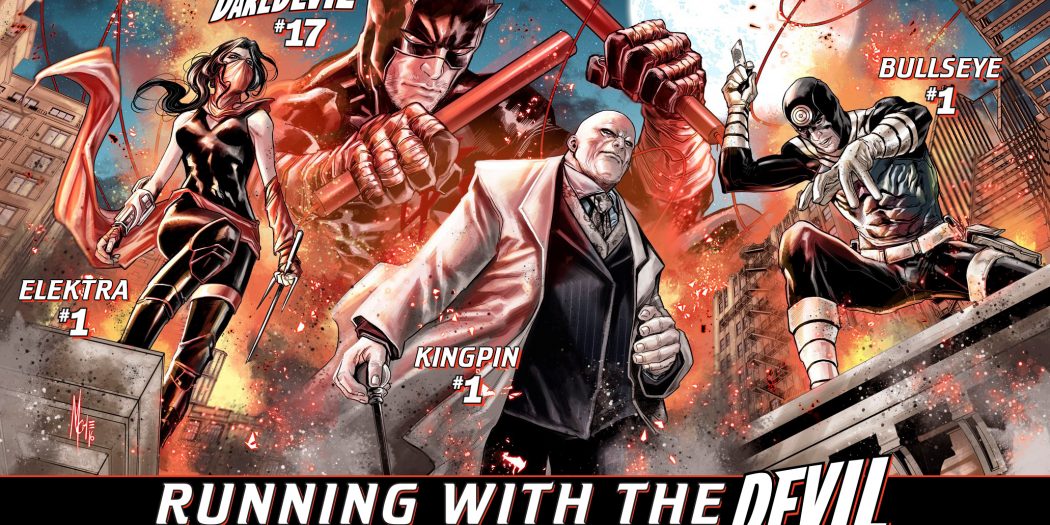 A total of four Daredevil-themed comics will be on the racks come 2017.

A sub-universe of street level characters

For a while now, Marvel has gone big with almost all of its characters. Universal threats have been a standard occurrence, and Earth-ending happenings have been the norm. It’s not something that’s gone unnoticed, as the days of the ‘street level’ hero seemed to have passed. Well, they’re back, and they’re back in a big way.

“Fans are going to love what we have in store for our street level superstars in 2017,” says Editor-in-Chief Axel Alonso. “We’re taking Daredevil and some of the characters in his orbit, sending them off in different directions for some brand-new stories from rising stars in the comics industry. How long before they all collide? Knowing Matt Murdock – not long. There’s some big things happening in this corner of the Marvel Universe, and these four titles are just the beginning.”

Drawing from his popularity thanks to the Netflix series that carries his name, Daredevil is expanding big time. Next February, you can expect to see a total of four comic books on the racks that will carry his little corner of the Marvel Universe into the spotlight.

Daredevil itself will be continuing of course, with issue #17 hitting in February. It sounds like it’s going to be an arc not to miss too, as it’ll be exploring just how it is that the hero regained his secret identity. Joining that book will be Kingpin, Elektra, and Bullseye #1’s, all with fresh takes on these classic characters.

Bullseye and Kingpin’s comics will be villain books, so no worries. These aren’t going to be anti-heroes or anything. As for Elektra, she’ll be heading to Vegas to battle none other than classic X-Men villain Arcade. Think there’ll be a new Murderworld to survive? Yep.

Jason's been knee deep in videogames since he was but a lad. Cutting his teeth on the pixely glory that was the Atari 2600, he's been hack'n'slashing and shoot'em'uping ever since. Mainly an FPS and action guy, Jason enjoys the occasional well crafted title from every genre.
@jason_tas
Previous Evil Dead 2: Revenge of Dracula (comic) Review
Next Super Mario Run lands on iOS on December 15th

It’s a big weekend for tabletop gamers, as Catalyst Game Labs is launching a new …