The major toy release for the upcoming movie, Hasbro’s massive Imperial AT-ACT is on the way.

Rogue One features a new kind of Walker

By ‘Walker’ I don’t mean zombies. I’m talking about the gigantic, metallic variety that are piloted by the Empire’s finest.

In the films, we’ve seen AT-AT’s in action twice. Once was on the forest moon of Endor, though there one was just kind of walking around. It was in the previous film, on the frozen wastes of Hoth, that we saw what these monsters were really capable of.

We’re about to see them again too… well, sort of. The Walkers in Rogue One: A Star Wars Story aren’t AT-AT’s really, but AT-ACT’s. What’s that mean? Well it means they’re a little different, and serve a (technically) different purpose in the Star Wars universe’s fiction.

Bottom line, they look pretty freaking cool. And so does the toy from Hasbro. 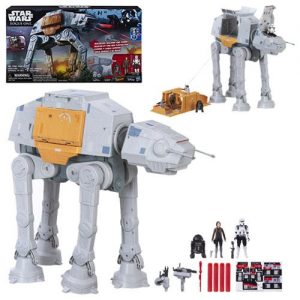 Easily the biggest toy in the new series of Rogue One figures and vehicles from Hasbro, the AT-ACT is pretty great looking. It’s also pretty big looking. I guess, anyway, as the only definite what we know is that it’s in the 3.75″ scale.

There are no detail for size in the official listing, but it looks similar to the Walker that hit retail a few years back. If you remember that one, it was something like twice the size of the classic Walker from the 80s. And it was uber-detailed too, with even an included speeder bike. Still, it’s hard to tell from the image and I’m going to say to be cautious, just in case. So you might want to assume that it’s in the smaller scale.

This new one has no bike either, but it does have three figures and a removable cargo bay. The bay apparently folds out into a small playset, which is a nice little bonus. Oh, and the Walker is remote controlled too. Did I mention that?

Yep, you can use an app on your phone to make this sucker actually stomp across your home/yard/whatever. Seems pretty awesome honestly. If you agree, then you might also be thinking that the AT-ACT is pretty expensive. Guess what? You’re right.

Hit the link below to find out more, or to order one for yourself from our pals at Entertainment Earth. The AT-ACT drops next month.

Jason's been knee deep in videogames since he was but a lad. Cutting his teeth on the pixely glory that was the Atari 2600, he's been hack'n'slashing and shoot'em'uping ever since. Mainly an FPS and action guy, Jason enjoys the occasional well crafted title from every genre.
@jason_tas
Previous The Art of Battlefield 1 (Book) Review
Next GTA Online goes full-on Tron in new DLC