The cast of the new River City game Tokyo Rumble has been formally announced, and they’re as old school as might have hoped.

“We’re excited to be able to deliver such a diverse cast of characters for River City fans,” said Hiro Maekawa, President & CEO of Natsume. “We know that a lot of River City fans have been waiting to play as some of their series favorites in English for a long time now, so we can’t wait to hear what series fans and newcomers alike think of the game and its eclectic cast of characters.”

Eclectic indeed. Though, at the same time, River City Tokyo Rumble’s cast is pretty darn familiar. And I don’t say that solely because the new game looks remarkably like its predecessors. Simply put, Natsume has stuffed a whole mess of favorites in this latest brawler. Misuzu, Shinji, Riki, and Kunio will all be present and accounted for. 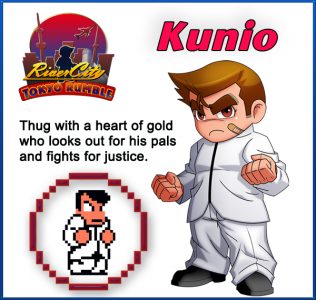 Aside from all the characters, Tokyo Rumble will also add in something entirely new with RPG elements. It’s been a while since the last River-release, but fans should remember that these games are usually just punching and kicking. So this one will deliver a bit of new mechanics to go along with all those playable fighters.

As to when it’ll see release for the 3DS, we’re not quite sure. Natsume hasn’t announced anything in the way of a launch date, but  we’ll definitely keep you posted when they do. River City Tokyo Rumble might be a game to watch for Nintendo’s handheld in the near future.

Jason's been knee deep in videogames since he was but a lad. Cutting his teeth on the pixely glory that was the Atari 2600, he's been hack'n'slashing and shoot'em'uping ever since. Mainly an FPS and action guy, Jason enjoys the occasional well crafted title from every genre.
@jason_tas
Previous Overwatch Getting Some Changes to Season 2
Next Space shooter Everspace blasts onto Early Access programs