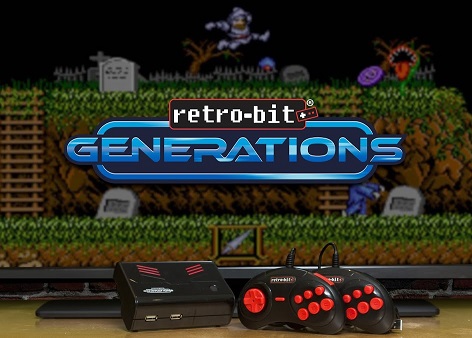 Some of the greatest games of all time will be locked and loaded on Retro-Bit’s newest console, the Generations.

Hot on the heels of the mini-NES announced by Nintendo and a few other ‘software included’ consoles, comes the Retro-Bit Generations. Chances are that you know the name already, with Retro-Bit having made some excellent retro consoles in the past. The difference with this Generations and this systems though, is that while they used carts to play games (just like the originals) the Generations has ’em all built in.

“Retro-Bit has been known to make products for the hardcore retro gaming crowd, and we are thrilled that Retro-Bit created a product that is aimed at a wider audience. We believe that the Retro-Bit Generations is a fantastic introduction for beginners into the world of retro gaming, however, it includes a lot of titles that resonate with experienced gamers.” Said Ron Pang, Vice President of Sales and Marketing for Innex Inc.

And there’s some great stuff included here too. In total, there’ll be 100 games included, but here’s a taste of what’s in the box:

Pretty nice. Innex says that they’ve worked with “world-renowned gaming developers” to flesh out the stable of titles. You can pretty easily see that that’s the case, since there’s games from Capcom, Irem and others here.

The Generations has an SD card slot too, so you can “save or transfer archived game progress to other consoles”. And it also includes two controllers very reminiscent of the Sega Genesis’ second standard issue pads. You probably don’t have to sweat connections either since it has not just AV output, but HDMI as well. So it’ll play nice with your new-fangled TV.

As to when you can expect to be able to add one of these to your retro setup? That’ll be this coming Autumn, when the Retro-Bit Generations hits retailers for $59.99 USD.

Jason's been knee deep in videogames since he was but a lad. Cutting his teeth on the pixely glory that was the Atari 2600, he's been hack'n'slashing and shoot'em'uping ever since. Mainly an FPS and action guy, Jason enjoys the occasional well crafted title from every genre.
@jason_tas
Previous Transformers: Fall of Cybertron hits Xbox One | Edit: PS4 too!
Next SDCC 2016: Diamond Select stocks Ghostbusters, Nat’l Lampoon, Predator and more