One of the hottest games of 2016, Blizzard’s Overwatch is about to arrive in a big way at Dark Horse Comics.

Want more Overwatch? I’m guessing that the answer to that is ‘yes’, and if that’s the fact, then you’re going to be very happy indeed with this announcement from Dark Horse Comics. Fresh from the floor at Comic Con, word is that Overwatch will be getting the royal treatment from the publisher.

Dark Horse has made official a whole ‘platform’ of Overwatch stuff. That means that you can expect comics (of the digital variety), graphic novels, and an art book (Summer 2017). That last one alone should be enough to get fans excited. DHC does have a pretty impressive history with the genre after all. 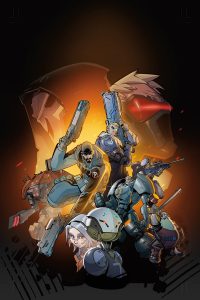 As for the comics, those are already being published. Printed in a digital format only, Overwatch comics are 8 pages apiece, and are free to download and read. Yes. Free.

On the other side of the coin, the more expansive graphic novel will be a while yet. Set for release next April, the hardcover volume is canon and will be 100 pages of sequential storytelling. That means that, while the game is light on narrative, fans who want history will get it from this book. Most of the story is under wraps, but we can tell you that you’ll learn the story of the original Overwatch strike team.

It’s an ambitious plan overall, but if there’s any property that calls for it, it’s Overwatch.

Jason's been knee deep in videogames since he was but a lad. Cutting his teeth on the pixely glory that was the Atari 2600, he's been hack'n'slashing and shoot'em'uping ever since. Mainly an FPS and action guy, Jason enjoys the occasional well crafted title from every genre.
@jason_tas
Previous July 27th Valiant Previews: Divinity, X-O, and 4001 AD
Next Juri Kicks Into Street Fighter V This July