Kirby has a reputation for being on the easier side of things in terms of platformers. Kirby Planet Robobot keeps this relative ease, but adds to the expected Kirby formula in meaningful and pleasant ways.

The main game here is made up of the same stuff as many other Kirby games. The player controls Kirby and takes him on an adventure through different stages featuring different types of challenges. Kirby gameplay stays the same, as players use Kirby to absorb the power of enemies and gain special abilities. The difference in Planet Robobot however, is that Kirby gets access to a Mech Suit.

The suit isn’t always available, but when it is it adds a new dimension to an already fun game. The suit can absorb any ability that it comes across. Different enemies will give the suit different abilities and drastically alter how the game is played.

And it’s a good thing that the gameplay is interesting, since the story is pretty non-existent. Basically, a company lands on Pop Star and mechanizes the planet. Kirby moves to save the day. That’s it. 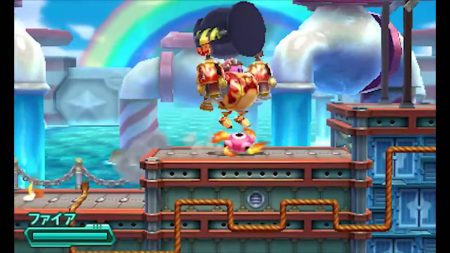 Even with the (expectedly) weak story though, the campaign offers huge differences and variety in stages. In some stages it is simply Kirby versus the world, in others he dons his mech suit for virtually the entire level, and in others yet, the suit turns into a jet plane and the level functions as a side scrolling arcade shooter. One of the strongest points for Planet Robobot is that every level is refreshing and fun, if a little easy.

The difficulty in Kirby games has never been in beating the main levels though. Hell, the main character has an ability that lets him fly indefinitely… in a platformer. Instead, the difficulty comes from extra modes, such as Metaknightmare Returns, where you play through various story segments as Meta Knight, and the Arena, which is basically a boss rush.  You can also elect to collect all of the “code cubes,” which are comparable to big coins in Mario games, which will make the game a little tougher. In all though, the game isn’t about being tough, and it doesn’t need to be.

A strong focus on gameplay

Kirby games focus on gameplay, and that shines through. With tons of different abilities to copy, it would take a long time to learn all of the moves that each ability offers. This also means that it’s pretty impossible to get bored, since every ability is offered only sparingly, so it would be difficult to keep using one ability until you got bored of it. Of the new abilities, poison is my favorite. It offers a dps alternative to the dexterity based fighting that Kirby usually offers.

The level design is clever and ingenious in that stages are made up of a background and a foreground. Although it is usually pretty obvious where you need to be, this inclusion gave some puzzles some extra weight and made me feel just a little more free while playing.

The controls are very tight, and throughout my time with the game, I never had any issues of the game not controlling how I wanted. Intuitive controls made sure that Kirby behaved exactly how I needed him to. 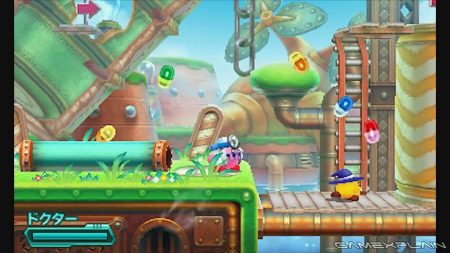 The game looks great in its cartoony way. Let’s just say that if you have ever seen a Kirby game, the art direction won’t surprise you. However, the inclusion of robotic themes on older enemy types offer a great update. It fits the theme of the new game very well.

There were never instances of confusion because of how things looked. The game does a great job of making sure that the players can tell what is going on.

In terms of audio, the game features weaker music than I would have liked. The music is still fun, but nowhere near the golden days of Gourmet Race and Green Greens. Classic tracks are revisited with remixes, but personally I would have rathered the actual songs return. Even if they were only there for a stage or special event, it would have been nice.

In the newest Kirby game, the biggest problem for me was the lack of old school music. The controls, graphics, theme, and gameplay additions all do great to serve Kirby for fans new and old alike.

Erich was introduced to gaming by his grandfather before he could walk. Since then, he has grown up loving Nintendo and most games in general. He couples his love of videogames with journalism to cover news, provide reviews and tell it how it is in the gaming world.
Previous Last call for GOG’s Summer Sale
Next Space Rift: New Trailer for VR Sci Fi Adventure Unveiled