Want to get up to speed with some of the greatest heroes in comics? Marvel’s Story Thus Far series of variant covers should hit the spot. 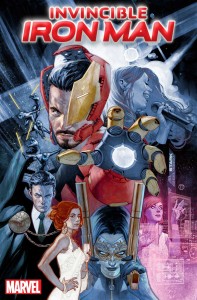 “The Story Thus Far Variants are something new we’ve never attempted before,” says Marvel SVP Sales & Marketing David Gabriel. “Using one piece of artwork to give new fans a quick snapshot of what’s going on and get them ready for the second arc. In an effort to continue promotion of these exciting new titles, we’ll also be using this artwork for online advertising and in comic shops across the country. ”

I would use it too, on just about anything, as it’s pretty freaking cool-looking if that preview image to the right is any indication of what we can expect from the whole lineup. In a way, t6his new initiative from Marvel reminds me of the cover images that we used to see on comics in the silver and golden ages of the art form.

You know the pieces, the art that actually showed hints at the story inside, complete with word balloons and text. Story Thus Far goes one step further though, with imagery that will really explore some of the biggest moments from the arc to come, but all in one illustration.

The series will start off with “select” books form the second wave of story arcs in Marvel’s post-Secret Wars universe. The variants will run throughout February and March, so these’ll be coming up in short order. Here’s the list of books where you’ll be seeing Story Thus Far:

And Story Thus Far won’t be stopping there either, as you can expect to see even more of the variant covers in April and “beyond”. I’d imagine that if these sell though at a decent rate, you’ll see plenty more from the line.

Jason's been knee deep in videogames since he was but a lad. Cutting his teeth on the pixely glory that was the Atari 2600, he's been hack'n'slashing and shoot'em'uping ever since. Mainly an FPS and action guy, Jason enjoys the occasional well crafted title from every genre.
@jason_tas
Previous Brand new tracks hit for Guitar Hero with Andrew WK, Pat Benetar and more
Next Mezco’s One:12 Collective is going where no figure line has gone before