Break the walls down!

The Rainbow Six games franchise has been running for an extremely long time now.  Indeed, last year’s cancelled Rainbow Six Patriots would have been the eighteenth game to bear the franchise name.  But instead, out of the ashes of that game comes Rainbow Six Siege, as once again Team Rainbow have been called into action.

Rainbow Six Siege takes the form of a team based tactical shooter.  The main mode of the game sees you playing 5 on 5 multiplayer matches pitting a team of Attackers against a team of Defenders over the best of 5 rounds.  The Defenders will have to either keep hold of a hostage or a series of bombs, and it’s the job of the Attackers to rescue the hostage or defuse the bombs.    Each round will end when either the Attackers have accomplished their goal or all members of one team have been killed, and with no health regeneration or respawning, that can potentially happen very quickly.  Each round is only very short though, so even if you die, you won’t be out for long.  And you can help your team mates even in death by giving them a heads up from the various cameras around the map, and any drones that have survived the opening phase.

Each side has a selection of 10 unique ‘Operators’ which you unlock by earning an in-game currency called ‘Renown’, which you earn by just playing the game generally.  The game starts with a short preparation period, in which the Defenders prepare their defences and traps to try and wipe out the Attackers, and the Attackers send small camera drones around the map to try and find the enemy positions and where the traps are, and plan their attacks accordingly.  Each different Operator has a selection of gadgets and their own special ability at their disposal, such as Sledge, who can break through walls and windows easily with a Sledgehammer, or Castle, who can set up metal barriers instead of wooden ones that can only be gotten through with the use of breach charges and explosives. 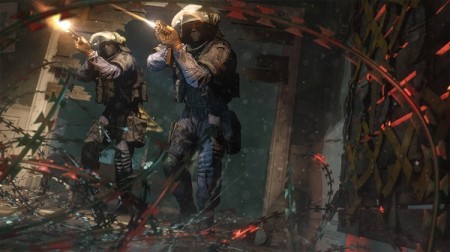 The destructible environments are an main focus of the tactical play in Siege.  Wooden surfaces can be blown through to give you another avenue of attack or another viewpoint to see what’s going on.  You can put a whole in any wooden barricades as well.  Some can be completely destroyed, whereas anything with a metal framework in it can just have holes blown in it, but you can’t pass through. You can also break through trap doors in the ceiling to drop down on an unsuspecting enemy below. You can rappel up the sides of buildings and even change you stance, so you can poke your head through the top of a window while hanging upside down and spy the room, for example.  As the defenders, you can attempt to reinforce wooden walls by latching metal panels on them to prevent attackers simply blowing through it.  The range of tactical options available to you is quite incredible, and the variety of the maps as well as differing spawning points for players and objectives keep things fresh for a while.  It would be nice to have a couple of other multiplayer options as well.

One thing that people have been talking about with Siege is that it wouldn’t have any kind of real single player campaign, and indeed it doesn’t, with the single player portion of the game taking the form of ten ‘Situations’ missions, which are essentially a glorified tutorial designed to show you how the game and it’s various operators work.  It’s a nice way to introduce the mechanics and options available to you, although these missions sadly aren’t particularly interesting, and the aggressive AI coupled with the fact that you’re on your own against the AI makes the missions a complete slog to get through.

The third mode available is the “Terrorist Hunt” mode, which sees you and a bunch of up to 4 friends working co-operatively against the AI completing objectives like finding and defusing bombs or killing all the terrorists who have taken over a map before they kill you all.  These add a bit of variety and in my experience was actually the best way to earn experience and renown.  If you don’t feel like playing with others, you can play this mode solo as well. 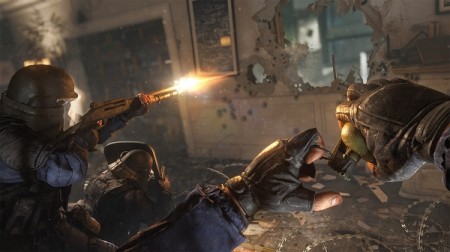 The sound in this game is perhaps one of the most impressive things about it.  Hearing explosions and nearby footsteps and enemies talking to each other creates a tense atmosphere as you attempt to figure out where the enemy is going to come from and preparing yourself accordingly.  The sudden shock of seeing a window explode near you and waiting to see if the enemy is going to come in or whether it’s just a diversion is great, and really keeps you on your toes.

There are some problems with the game.  The earning of currency in order to unlock operators isn’t exactly the fastest.  Each time you unlock an operator from a certain squadron, each successive operator costs more Renown to unlock, which can be annoying if you unlock a new operator but discover that they don’t really go with your play style.  If you want to increase the rate of currency gain, you can buy boosters to help you.  This would be fine in a free to play game or even a cheaper game, but it feels like just a wallet grab in a full priced retail release.  If you happen to be matched up with a team mate who has a booster equipped, the rest of the team will get a small boost to their renown gain in the game, which is nice at least.  Also, renown is used to unlock different attachments and skins for your weapons.  However, there are also some skins which are unlocked using “Rainbow Coins” which can’t be earned and have to be bought, which is a little grating.  Yes, you don’t have to buy skins for your weapons with real money if you don’t want to, but it all feels a bit cynical. 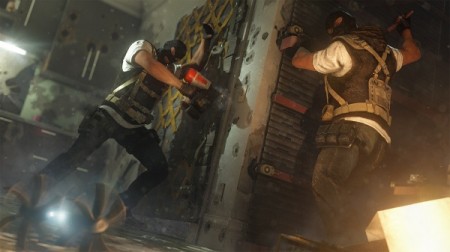 There does appear to be a lack of content in the game generally as well.  There are a fair few maps in there with some interesting opportunities to play around with.  Once you’ve played the game for a few hours, you feel like you’ve seen all there is to see.  And while the game is certainly smarter than most first person shooters, very few games actually end with the objective in the level being met.  It often just descends into a team death match scenario very quickly.  Although that’s not necessarily a bad thing because the slower pace of this game compared to the likes of Call of Duty still allows you to be tactical even in that scenario.

FINAL THOUGHTS
Rainbow Six Siege is certainly an enjoyable game at a core level.  The gameplay is fun, it feels more cerebral than more mainstream first person shooters and the range of abilities available to you certain give you options to fit your play style.  That said, it feels somewhat lacking in content for a full priced retail release, and if you could unlock new operators and equipment a little quicker it would be nice.  Playing through a handful of games to unlock an operator, only to realise that operator doesn’t work well for you and having to play twice as long again to potentially unlock another operator is annoying.  And the single player mode is a complete slog and no fun at all.

As a full price release, I can’t really recommend buying it yet unless it sounds like it really appeals to you.  But if you manage to find it on sale, then it’s a fun tactical shooter that is certainly worth a look.

Mike is Brutal Gamer's Indie Editor. He has been playing video games since the early 90s and is fond of racing games, puzzlers and MMOs. Typing /played while in WoW makes him cry, but not enough to stop him playing some more.
@Ognawk
Previous Merry Christmas, from Skylanders: SuperChargers
Next Ready for a G.I Joe shared universe… with M.A.S.K., Visionaries, ROM, and Micronauts?!