The definitive Dishonored experience is here, though it’s not a must-buy for those who’ve already enjoyed the original release. 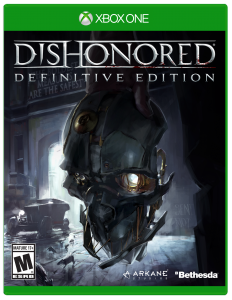 Whether or not you want to pick up a copy of Dishonored: Definitive Edition really rests on two things: 1.) Have you played the original? & 2.) Have you played the original and LOVED it? If you fall into the former category, then you really should secure a copy of this game, because it’s great. If you’re more the latter, then you might want to take a look at this new release, because it’s more of what you liked so much the first time around.

And if you fall into neither one of those categories, well, then you might want to take a pass. Here’s why…

Dishonored: Definitive Edition is basically exactly the same as the Dishonored: Game of the Year edition that was released a while back. The title contains all the expansions that were released for Arkane Studios’ excellent Dishonored when the game was brand new, and nothing else.

No, you won’t find any extra content here, or even and art section or anything like that. That’s hardly something new though, as with most ‘HD’, Definitive, or whatever other word you want to use, releases that come along, the Definitive Edition of Dishonored is just a visual upgrade and nothing else.

So bottom line, if you played the Xbox 360, PS3, or original PC release, then you’ve played a slightly less pretty-looking version of the Definitive Edition. And in that case, you might want to take a pass on this re-release.

And lest you think that the visual improvement is such that you simply must dive in and play the adventure again, think twice. Although they’re definitely improved over the last-gen release, the looks of the Definitive Edition aren’t mind-blowingly altered or otherwise improved. They’re good, great in some places, but not enough in my mind to warrant a replay for their sake alone.

So that’s my opinion on just the Definitive Edition, but as I mentioned, if you haven’t played the game ever, then you really should.

Dishonored is one of the best first-person anythings to come out in the last decade. It’s loaded with innovation and some excellently satisfying stealth mechanics that you just won’t find anywhere else. The game is marvelously deep too, with a rich storyline, and some truly awesome (and fun to use) abilities.

Starring a royal bodyguard named Corvo, Dishonored is set in a blighted land. The sorta-steampunk kingdom of Tyvia is besieged by a plague carried by rats, it’s one that’s killing droves and casting others as a kind of walking dead- and the rats are the seeming cause of it all.

Corvo returns after being sent on a mission by the Empress to look for a cure in the surrounding territories, and when he does make landfall it’s to find that he’s been set up to take the fall for the murder of the royal. The game really begins when Corvo is assisted in his escape, and then must quest to clear himself and bring the puppet masters behind the killing to justice.

It’s a lot more complex than that little summary of course, and the storyline twists and turns quite a bit, introducing tons of new characters and leading Corvo down a strange, supernatural tinged road. All the while, you’ll be stabbing, shooting, and casting spells of a sort as you traverse different zones in the cityscape of Dunwall, the capital of the kingdom.

The controls are awesome too, by the way. Not only are the basic actions like movement, attacking, and handling twin-weapons as easy to pull off as you might imagine, but the special powers (and there are decent amount of them) are super-simple to cycle through and enact.

On-screen action basically goes into a slo-mo stage while you’re cycling through your powers on the wheel. At this point, you can select an ability, use that ability, then pick another and use that. Rolling from there, and if you have enough juice in the meter, you can carve a swath through your enemies with surprising ease. Not that it feels cheap at all using these powers; they’re awesome and basically make you feel like a supernatural-powered superhero.

Equally great are the voice actors and the score, both of which is sublime. The musical accompaniment perfectly sets the tone of the general setting without getting int he way of the play experience. Which is to say that it’s enjoyable, but doesn’t pull you out of the world that Arkane Studios has created.

Oh, and the cast is stellar. Susan Sarandon, Michael Madsen, John Slattery, Lena Headley, Brad Douriff, Chloe Grace-Moretz, (no I’m not kidding with this list) and others are all way above average and fantastic to hear as you play. The only complaint I have about the cast is that Corvo has no voice. Yep, that’s right, he’s a silent protagonist.

Characters react to him as though he’s talking at times, but you don’t hear it. This is a design decision that was made maybe most famous by the Half Life series and it’s one that I can’t stand personally. I get the idea, that it’s supposed to make you feel more like the character that you’re playing as, but for me it makes me feel like something’s unfinished.

I get that I’m in the extreme minority on that feeling, as I don’t think too many gamers really care one way or the other, but it would have been awesome to have some A list talent playing Corvo. Hearing him dish out some badass lines as he lays waste to the enemies of the Empire would have been pretty sweet.

I pretty much laid it out for you in the first paragraphs, but just in case you just skipped down here to read the FT’s: Dishonored: Definitive Edition is a solid pick up for anyone who’s looking to play the game for the first time.

It’s also a good buy (especially at the less than usual price for a new game) for anyone who’s looking to play again, or wants a refresher before jumping into the sequel, which is on the way next year. For anyone who wasn’t sold on the original though, or if you were looking for some massive upgrade in graphics, you might want to take a pass or wait for it to drop a little lower in price before you grab it.

Dishonored: Definitive Edition is an amazing game at its core, but not a completely necessary pick-up of a re-release.

Jason's been knee deep in videogames since he was but a lad. Cutting his teeth on the pixely glory that was the Atari 2600, he's been hack'n'slashing and shoot'em'uping ever since. Mainly an FPS and action guy, Jason enjoys the occasional well crafted title from every genre.
@jason_tas
Previous Blood Bowl II trailer pits Orcs against High Elves
Next Twitch plays Fallout 3