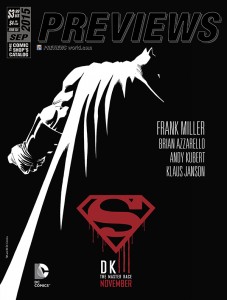 Not a pile of info, but here’s a little sneak peek at what’s waiting for you in the September issue of Previews, an issue that’s got the overriding theme of ‘As Seen on TV’. And basically, that shakes out to mean that the whole magalog will be loaded for bear with “comics inspired by television and the television inspired by comics”.

Here’s your rundown on what you’ll find inside:

Jason's been knee deep in videogames since he was but a lad. Cutting his teeth on the pixely glory that was the Atari 2600, he's been hack'n'slashing and shoot'em'uping ever since. Mainly an FPS and action guy, Jason enjoys the occasional well crafted title from every genre.
@jason_tas
Previous Harmonix announces new tracks and retail editions for Rock Band 4
Next Nintendo is ready to talk to Hollywood again