11 Heroes band together to defeat the ultimate enemy The End – only not everything is as it seems. 11 Heroes. 6 Traitors. One treacherous tower. Can you survive? 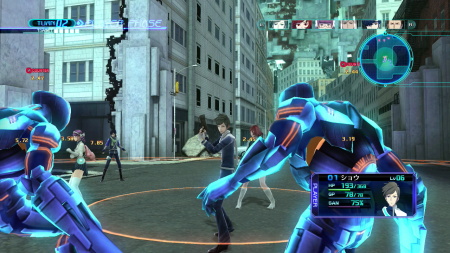 Lost Dimension is a game developed by Lancarse who is known for Etrian Odyssey and Shin Megami Tensei: Strange Journey.  The game was developed by an all-star cast (at least in my book) composed of various people who worked on several Persona related materials such as the script of the Persona 3 Movies and the Persona 4 Anime.

Worth noting too is the presence of Yuu Yamashita as Character Designer whose noteworthy works include character designs in the Sword Art Online anime, and Makoto Tsuchibayashi whose credits include working on the original Mega Man Legends and of course his most famous character design of Dante from the original Devil May Cry. Yes, that Dante.

The first thing that I have to mention about this game is that it isn’t one of the more explosive games in terms of budget, but the title does leave a favorable impression after getting through the first few hours of repetitive grinding. The story is decent, the music is great, the voice acting could use some work (but is generally okay if not a bit dry at times), and the fighting system is amazing. 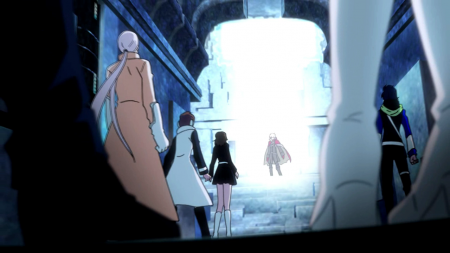 Many RPG players may note some similarities between Lost Dimension and Sega’s Valkyria Chronicles, and those observations are correct. The game does mirror Valkyria Chronicles, but It also has its unique aspects that make Lost Dimension standout, such as the unique Assist System, Character Development System and the progression of relationships with various characters ala the social link system in the Persona series.

The visuals of Lost Dimension are amazing for handhelds in general, but not so much for the powerful Vita which is capable of so much more than is displayed here. The character designs are spectacular though, and the monsters/enemies/remnants (oops, my bad, this is supposed to be a spoiler-free review after all) look nice if not repetitive after a few hours of playing. There is little variety between the designs of the various enemies however, save for the ever changing theme per level of the tower and their varying sizes and strengths.

Speaking of character designs, most of the characters actually look like they would come from a game such as Shin Megami Tensei IV instead of something like Etrian Odyssey. The uniforms look eerily similar to the SAMURAI uniform Flynn wears in SMT IV, but as a lover of that unforgiving game, I can’t complain.

The game’s cut scenes, albeit limited in nature, actually work out well with the kind of game that Lost Dimension is. See, the story isn’t necessarily the same each time you play it… but more on that later. The coloring and the smoothness could actually almost compare to the God-tier animators that are ufotable and their work with Tales of Xillia – but only just. That’s not saying that the animation for the cut scenes are necessarily bad, but again, they could be so much better. 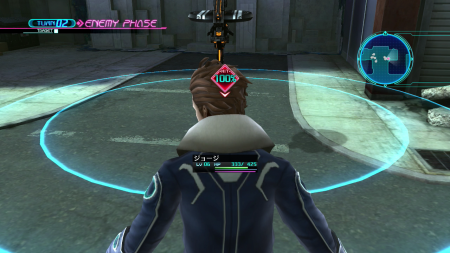 The HUD and the menu could use some work, however. The designs look uninspired and are a little tough to work with, and it actually took me a few moments to understand how the levelling system works due to the fact that the menu looks kind of terrible. It makes the rest of the skill tree hard to read/traverse. It does grow on you, but what can be better should be better, especially for a promising game such as Lost Dimension.

The music in the game though, that’s great and I actually like the OST enough to buy it. There’s not a lot of musical pieces in the soundtrack, but what is there is definitely enough to keep me playing and wanting for more. On a related note, the voice acting in the game is not too terrible if you consider dry reading as good, but some of the characters stand out even so.

I disliked the protagonist Sho’s voice acting, as he seemed like he was there just for the sake of being there and I couldn’t feel any heroism from him that’s his own. He’s not a silent protagonist, but he feels like a sponge, leeching on his teammates for an actual reason to fight aside from the fact that “The End” seems to hate him for some reason. So overall, the voice acting could have used some work, but Himeko, Mana and Nagi did well, so did George. I love you, George, you caricature of Western Otaku you.

Past the aesthetics though, and like I said earlier, the game is a tactical RPG wherein you control your team, which is comprised of individual units which you control on a virtual chessboard that is invisible. Think Final Fantasy Tactics but with the freedom of movement and the stamina system of Valkyria Chronicles. What makes this game unique is the ability to “Defer” some “Sanity Points” (both vital parts of the game) to enable your teammate to move for one more turn at the cost of said teammate’s turn. The enemies have a pretty aggressive AI who will try to gun you down using the game’s assist system which makes the already difficult game more troublesome to deal with – and this is on the normal difficulty. 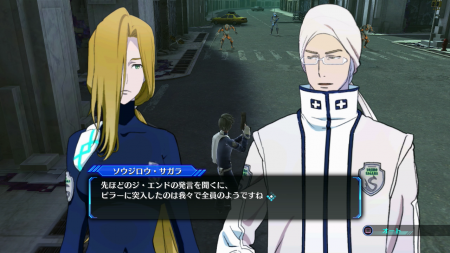 The controls don’t feel clunky and they actually feel good on the Vita. The almost-perfect control scheme could only be enhanced by making use of the Vita’s touchscreen, because navigating through the menus is a pain in the butt to be honest.

Another unique aspect of Lost Dimension is the ability to progress your relationship with your teammates a’la the social link system in the Persona series. During your downtime, you can interact with your teammates to discuss various things such as who you think the traitor could be (more on further on) or they may share some small snippets of their personal lives every now and then, but you need to work for that trust.

Okay so what is all this traitor business? Well, you are an elite group of Espers with special abilities tasked by the United Nations to take down the big bad called The End. Simple right? No, not really. Here’s where the traitors come in. You have 11 members in your team and 5 of them are traitors. You need to figure out who the traitor is before the judgment portion of every level appears, which is unlocked by completing the main mission. Whoever the majority deems to be the traitor will simply be disappeared by The End. 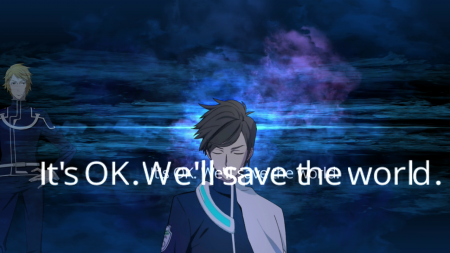 Wait, so what if I get the wrong person, you ask? Well, the game is funny this way since the traitors actually change every time you play! For example, the traitors of the last playthrough could actually be the real heroes the next time you play the game and trust me when I say that you WILL play the game again to achieve the true ending.  Anyway, if you choose the right person then good, you didn’t condemn an innocent person to guilt. If you choose the wrong person, however, then the game will give you a surprise come the final battle – where it really counts. (Ouch.)

The traitor and judgment system is actually one of the more interesting reasons to play the game as the tension of choosing between your teammates and trying to figure out who the traitor could be is a great way to raise tension and keep things fun. You can’t always make the correct decisions but, again, the characters are ESPERS and Sho, the protagonist, has the ability to dive into his teammates consciousness to determine who the traitor is. Be warned, however, that the ability can only be used three times per level of the game so if you fail to determine who the traitor is before then, well, good luck.

The game is difficult if you try to rush the tutorial and skip getting to know the levelling system, but that’s kind of how it goes for every game to be honest. Things may seem hard and unforgiving at first, but get to know the game and mold your own battle plan and you should be fine! Just try not be too greedy when you play because I learned the hard way that no, you cannot have everything the first time you play through.

Play is tedious though, in that it requires the player to grind for quite some time. But watching your strategies unfold in the long run is a fun way to reap the benefits of learning and mastering the game. It’s rewarding in its refusal to forgive and its difficulty to perfect. 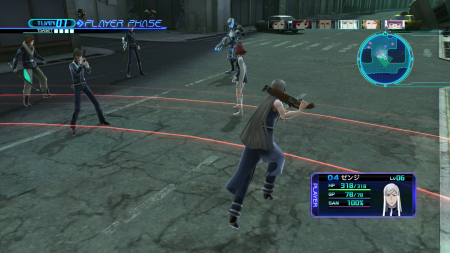 What about equipment? Well, The End provides you with some facilities to exchange a certain material for weapons, armors, items and apps (which act as stat boosters) and each one is essential to surviving the many horrors of the tower, but it isn’t that easy quite frankly. Money is terribly hard to save due to the constant need to upgrade and replenish health items and the weapons that are needed to effectively deal damage to the enemies. Sound hard? Quite hard, to be honest.

The levelling system of the game reminds me of the basic RPG skill tree where the player will allocate points to unlock certain skills, some devastating enough to change the tide of battle correctly – and I’m not exaggerating.  I said the levelling system is unique and it is for the reason that you can mix and match the various ESPER abiltiies your party members have – the catch is they have to be gone before you could harvest their abilities. It’s twisted but the remaining party members grow to be able to understand the necessity of such actions.

Some technical issues of the game are present in the R1 digital copy of the game and they happened quite regularly on my unit (which works well with other graphic heavy games such as Uncharted and Metal Gear Solid). The game sometimes crashed when I would try to initiate it, and more often than not, the game stutters whenever I try using a graphic intensive ability such as Himeno’s Fire abilities. If these issues could be patched, then things should be golden.

All in all, Lost Dimension is a terribly fun game with lots of replayability and just the right amount of tension to go with it – provided you can survive the ruthless enemies from within and without who are trying to kill (hero) Sho all throughout the game.

Get the game on the Vita if you have one, it’s particularly a must have if you liked Valkyria Chronicles, or just RPGs in general.

Benj likes video games, neckties and scotch. His favorite games include Resident Evil 2 and Final Fantasy VIII. You may contact him at [email protected]
@ggburroughs
Previous Comic Shop Picks: Gods and Monsters (and lots more)
Next Nintendo’s sales are finally back up, but it’s not all good news 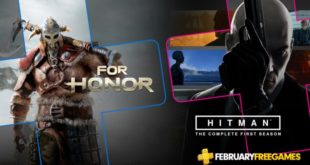 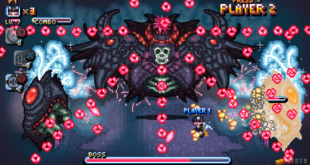 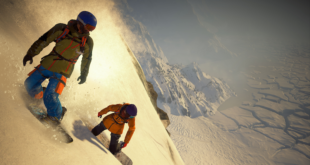 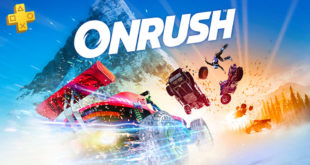 PS Plus free games for December include On-Rush, Soma, and more