Lara Croft and the Frozen Omen is on the way to the comic book realm just in time for her newest video game adventure. 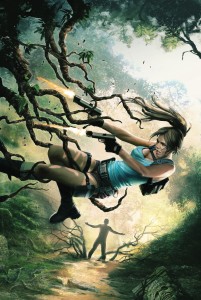 It’s double the Tomb Raider action this Fall as Dark Horse Comics and writer Corinna Bechko debut the publisher’s newest tale of action and survival with Lara Croft and the Frozen Omen. Not to be confused with Crimson Omens of any kind, Frozen Omen takes place in the universe of Lara Croft and the Temple of Osiris, and sequel Lara Croft and the Guardian of Light video games from Crystal Dynamics.

If you’ve never played those games, they’re fast, action packed, and tons of fun. They’re also way more like the old ‘superhero’ Lara than the new ‘survivalist’ style games, the next of which hits as a timed-exclusive for the Xbox One this Holiday.

The comic centers on a group of cultists bent on causing “world-wide cataclysmic devastation”. So, you know, Tuesday for Lara. Her mission is far from simple here either, as she must collect a series of ancient ivory artifacts. These relics are the only chance she has of stopping the doomsday cult, and chasing after them results in a “race against time”.

“Lara is incredibly fun to write,” Bechko told Polygon. “She doesn’t suffer fools, she’s smart, and she’s talented. She’s always ready for action, but she’s not afraid to think through a problem either. And she doesn’t ever wait around for someone else to save her. There’s a lot of satisfaction in writing a character like that.”

“We’re excited to continue our partnership with Dark Horse on a new Lara Croft comic,” said Rich Briggs, Brand Director at Crystal Dynamics. “This globe-trotting series is filled with the dual gun-wielding action and confident flair that nostalgic Lara Croft fans will love. It’s a great companion to the existing Tomb Raider comics, and offers fans another way to go on a high-octane adventure with Lara.”

Now that sounds like a fun time. Who doesn’t like a little globe-trotting and dual gun-wielding action now and then? The first issue of Lara Croft and the Frozen Omen hits stands this October the 7th, from the team of Bechko, Randy Green, and Jean-Sébastien Rossbach, who provides that killer cover art.

Jason's been knee deep in videogames since he was but a lad. Cutting his teeth on the pixely glory that was the Atari 2600, he's been hack'n'slashing and shoot'em'uping ever since. Mainly an FPS and action guy, Jason enjoys the occasional well crafted title from every genre.
@jason_tas
Previous Valiant’s Book of Death is already its best-selling book ever
Next Tales From the Borderlands Episode 3: Catch a Ride (Xbox One) Review