A bombshell is hitting SDCC with the DC Comics Bombshell Harley Quinn mousepad. 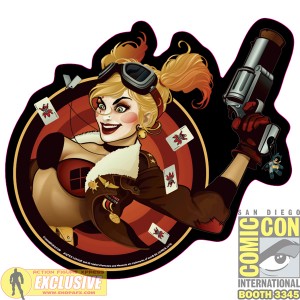 The character of the moment, Harley is something of a phenomenon right now. She’s not only a hit in the comics world, but she’s also on the way to the big screen in the Suicide Squad movie coming out next year, and is turning into one of the biggest fan favorite characters around.

As such, there’s just a teensy bit of merchandising out there and on the way featuring the insane former Joker gal-pal. Case in point, Icon Heroes’ SDCC exclusive mouse pad, that features the ‘Bombshells’ version of Harl emblazoned across it, which was featured on the cover of Harley Quinn #7.

Measuring approximately 10″ W x 9″ H and is 1/8″ thick, this pad is sure to bring a little (more) insanity to your desktop. You can grab one for yourself at the AFX booth (#3345) at the con next month by pre-ordering to pick up, but even if you’re not fortunate enough to be heading to SDCC, you can still get one. Just click here and head to the official order page to have one sent to your home via the aforementioned AFX.

Jason's been knee deep in videogames since he was but a lad. Cutting his teeth on the pixely glory that was the Atari 2600, he's been hack'n'slashing and shoot'em'uping ever since. Mainly an FPS and action guy, Jason enjoys the occasional well crafted title from every genre.
@jason_tas
Previous SteelSeries Siberia headsets come to current-gen consoles
Next Sony Reveals New Version of PS4