DST takes the wraps off some pre-Toy Fair reveals

Five all-new licenses mark the beginning of a packed 2015 for Diamond Select Toys. 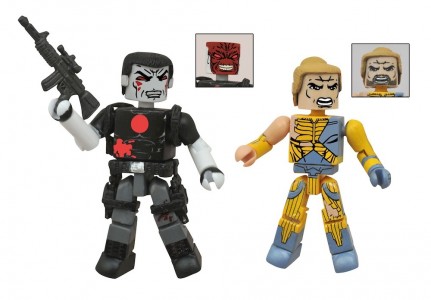 Comic Book Men, Predator, The Nightmare Before Christmas, SpongeBob Squarepants and Valiant Comics all get some very cool merch from DST this year. There’s more to come too, as the company has announced that the rapidly approaching Toy Fair will expand on all of the above, as to what the company will have on the shelves this year.

I have to say though, I’m pretty excited about the Valiant Comics license in particular. It’s just so cool to see a lil’ version of Bloodshot and X-O Manowar, crafted in the Minimate style. As for existing properties that are set to get a little more DST love, you can count Ant-Man, Marvel Minimates, Batman ’66, Kill Bill, and more among them. We’ll have plenty more for you as we get into Toy Fair from Diamond, but in the meantime, have a look at the listings below and see some of what’s on tap for 2015.

Jason's been knee deep in videogames since he was but a lad. Cutting his teeth on the pixely glory that was the Atari 2600, he's been hack'n'slashing and shoot'em'uping ever since. Mainly an FPS and action guy, Jason enjoys the occasional well crafted title from every genre.
@jason_tas
Previous Dying Light (Xbox One) Review
Next Sons of Anarchy: The Prospect hits the App Store