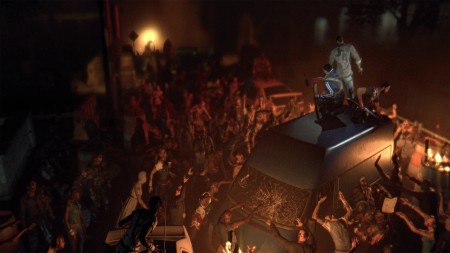 Ahh, Dying Light; a game that, it seems, no one but me was excited about. Actually, I find it quite funny that I was even looking forward to Dying Light at all. Especially after finding out the developer was Techland, creators of the Dead Island series (which I hate). What’s even stranger to me, is that I actually really enjoy it.

Why do I hate these things in Dead Island and not in Dying Light? Because in DI the weapons degraded too quickly, and there was absolutely no point in wasting the time or resources to repair them. While weapons degrade in DL quickly also, you can repair them on the fly without having to go to some bench, they also repair with extremely common items (I.E. Duct tape and Blades). As far as the Stamina meter goes, in DI it again wore out far too quickly. By contrast, in DL there are skills that you can acquire right from the get go which expand the stamina bar. 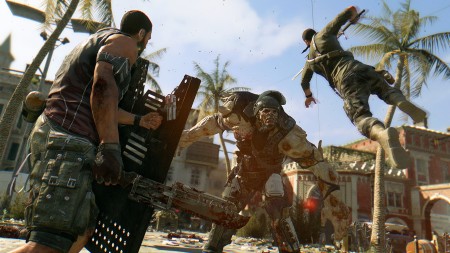 Actually, while we’re on the subject of skills, There are quite a lot. Three different branches, with 23 in the ‘Power’ tree (which handles damage dealt and skills related to it), the Agility tree (which stands over the principle of speed and well… agility), and the Survivor tree (which allows you kind of a combination of damage, agility, and crafting). All of them can be upgraded to maximum of course, so eventually you will be an even mix of The Terminator, Chuck Noland, and Rambo.

The story is pretty standard as far as zombie games go, but there are a few twists I’ll let you find out on your own. Including the main campaign, there are a huge load of quests, side quests, and random events, as well as supply drops which will fall from cargo ships that fly over. I oft found myself running to a mission objective, only to hear the sound of the engines, and I immediately started looking for that familiar red flare smoke.

I was not the only one attracted to the smoke though, obviously. It became very evident rather soon in my time with Dying Light that I’m not the only hyper-violent person out there trying to survive in the zombie infested city. Occasionally you’ll run across a group of bandits either torturing someone, hanging around, or looting a building. If you get near them they will warn you away, but if you get too close they will attack you. My best experience with bandits so far was when I took a fishing knife (which I greatly modified), and threw it right into the forehead of one of the bandits. The other two screamed, and ran off stating “Let’s not **** with that guy!”

The parkour, while difficult to get accustomed to (due mostly to the strange design choice of making ‘RB’ the jump button), is really quite fun and rewarding. You kind of get used to it the more you play and it works really well actually.

Finally, the combat. While it is repetitive at times, and frustrating difficulty spikes occasionally do happen (like the time when I was just trying to loot a car and when I turned around I was surrounded by two giant zombies, 4 quick zombies, and at least 10 regular zombies), but it is so, so satisfying. Seriously, the enjoyment I got out of curb stomping a zombie until it’s entire head was basically spread evenly around my leg was almost disturbing. Critical hits wield a cool slow motion x-ray similar to that of Mortal Kombat ’11 of all things. 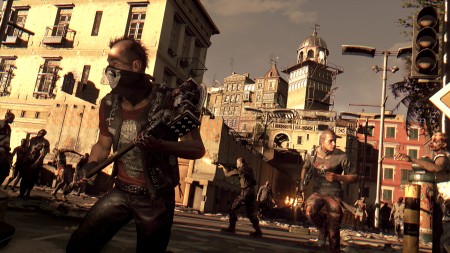 The game is not without flaws, though. Occasionally I would run across a really bad clipping issue, or climb onto thin air, and sometimes I would come to find a zombie half stuck in the ground vibrating like it was ready to burst through the atmosphere. These moments didn’t ruin my whole experience per se, but they did suck me out of the immersion quite a bit.

I know one of the biggest themes of the game is night-time, so I’m obligated to talk about it but… other than the night zombie introductory mission, I never experienced it. If you crawl into bed at the start of night, it skips straight to day. You don’t get anything extra for doing missions at night, and a peek at some nightmarish (albeit cool) zombies, so there’s really no point in not skipping it, unless you’re into a tougher experience, and then by all means…

Dying Light was a game that, in comparison to most releases this last year, received little hype. It’s a great time the whole way through, but if you examine it hard enough, like most games, you will find some issues. Go ahead and give it a shot if you’re into extreme violence, but if you’re queasy about this kind of thing, give it a miss.

Oh, and if you’re the kind of person that doesn’t usually care for zombie games, rent it and find out if you like it.

Five parts actual review, 2 parts sarcasm, 2 parts bad puns, and one part self loathing = one of my game reviews.
Previous McFarlane expands The Walking Dead building line to new retailers
Next DST takes the wraps off some pre-Toy Fair reveals