No, Secret Wars isn’t starting on Tuesday, but Marvel Comics has a special event planned to usher in the year when time runs out. 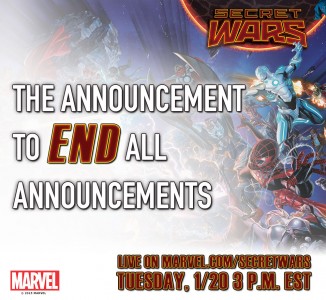 There’s little doubt that Secret Wars will be one of the marquee events on the comic calendar in 2015, and Marvel will be doing things up as only they can starting off this coming Tuesday, January 20th. The event will be hosted by Marvel’s Editor-in-Chief Axel Alonso and SVP, Executive Editor Tom Brevoort, who’ll be revealing the first details about the all-new Battleworld and shedding some light on what’s to come.

If you’re waiting with baited breath to see just how much Secret Wars will be shaking up the Marvel U (which I’m personally hoping is quite a bit), then you’ve pretty much gotta check out this live kickoff event. The Secret Wars Live Kickoff starts Tuesday, January 20th, at 3pm eastern time. You can log on and check it out in its entirety, by bookmarking this link. Want to join in on social media? Use the hashtag #SecretWars.

Jason's been knee deep in videogames since he was but a lad. Cutting his teeth on the pixely glory that was the Atari 2600, he's been hack'n'slashing and shoot'em'uping ever since. Mainly an FPS and action guy, Jason enjoys the occasional well crafted title from every genre.
@jason_tas
Previous Total War: Warhammer revealed- in an art book?
Next Kitana debuts in new Mortal Kombat X trailer