DanganRonpa returns to the Sony PS Vita for another go-around of weird. 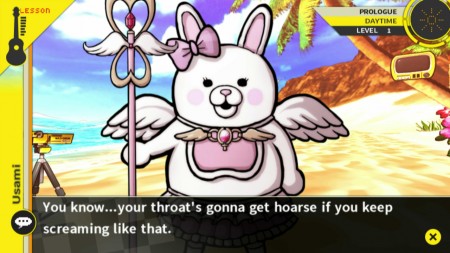 I’m not sure how to go about this. From a story perspective, DanganRonpa2 : Goodbye Despair is very intriguing and enjoyable. From an actual game perspective though, it’s wonky and (at least in my not so humble opinion) not that much fun.

I’ve never played a “Visual Novel” before and I’ve always figured that, if I was going to be looking at a Visual Novel, why not read a regular book or manga? To be fair, and like I already said, DanganRonpa2 is actually weird enough to be oddly captivating though. Let’s see if I can try to explain it, as the story goes as follows:

You arrive at Hope’s Peak Academy, which seems to be a world-class school, for only the best and the brightest. Accepting only those gifted at certain things, which doesn’t sound odd until you actually find out the other “Ultimate Student’s” skills. There’s the Ultimate Chef, Ultimate Swordsman, Ultimate Team Manager, Ultimate Gymnast, Ultimate Nurse, Ultimate Lucky Student (he won from a lottery to join the school), Ultimate Affluent Progeny, Ultimate Traditional Dancer, Ultimate Mechanic, Ultimate Musician, Ultimate Gamer, Ultimate Princess, and (get this), Ultimate YAKUZA. You, however, do not remember why you are at this strange academy, and do not remember your skill (this comes into play later in the game, but I won’t spoil anything).

A slight dizziness goes through the room and suddenly everyone there forgets actually walking in the Academy. A few moments later (this is where the game takes a turn for the weird), a floating pink rabbit flies in the room and introduces herself as Magical Miracle Girl Usami, and without warning, teleports everyone in the room to “Jabberwock Island”. Usami calls this a “field trip on a beautiful island paradise”, and the island has a large bridge, a supermarket, an airport (with hollow airplanes, meaning no engines), a resort hotel, and a farm. From the time of arrival, your character, Hajime, distrusts this overly nice “Magical Miracle Girl”… and then things go from weird to bizarre.

A flying black and white rabbit with a sinister face shows up, and calls himself “Monokuma”. A little bit of time and some horrid mischief later, and he tells you that in order to leave the island you must murder one of your classmates and get away with the crime. If you get away with it, you leave the island and all of the others die; if they figure it out, you are executed.

It sounds like a great anime plot right? Couple that, with the wonderful humor the game can be awesome at places. Then you realize, “wait… I’m playing a video game, not reading a book”; and that’s when things get somewhat frustrating.

I would like to point out, it took me exactly, 5 hours, 59 minutes and 42 seconds to get to the first murder. It may move faster for other people but you have to find all the Ultimates on the island and one of them is extremely well hidden (screw you Ultimate Affluent Progeny!!). After the first murder, you will be tasked with finding every piece of evidence spread out around the island. Once every piece of evidence is found and you’ve spoken to every living Ultimate, you will be taken to Monokuma’s Courtroom, and told to solve the murder.

DanganRonpa2: Goodbye Despair would make a better book, anime, or manga than it has a video game.

The story and gameplay is not balanced enough for it to be a good rounded game, however, I did enjoy myself playing it because the quirky characters, frankly bizarre dialogue, and fun story. I wouldn’t recommend it to people without a lot of patience though.

A non-Kojima fan check out the video game auteur’s latest. Here’s our review of one …