Rocket Raccoon jets into a solo book this Summer

Rocket splinters off of the Guardians of the Galaxy for his own solo book this Summer. Just don’t call him a raccoon. 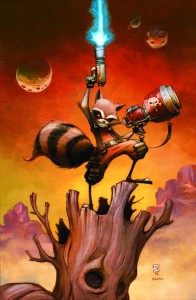 This July, blast off with the fuzziest Guardian of the Galaxy in ROCKET RACCOON #1 – an all-new ongoing series from Eisner Award winning fan-favorite Skottie Young! And you’ve never seen Rocket like this before!

As defenders of the cosmos go, Rocket Raccoon has faced his fair share of galactic battles. He’s been a hero to the weak, a champion of the good, a protector to the innocent, and a heartthrob to many intergalactic species across the cosmos. But is he ready to be a raccoon on the run?!

Rocket’s high-flying life of adventure and heroism may soon be a thing of the past when he becomes framed for something he didn’t do! And the authorities aren’t the only ones hot on his TAIL! (Yeah, we went there.)

“I figure that a guy like Rocket, with his attitude, has swindled his way over many planets and charmed many ladies,” says writer/artist Skottie Young. “He’s racked up a malitia of ex-girlfriends I’m dubbing the Exterminators. They’re all fed up and they’ve decided it’s time they dish out some payback on his furry little tail.”

With his pal Groot at his side, Rocket will have to blast his way out of trouble (and blast his way into some) if he wants to clear his name. Along the way he’ll tussle with some of the fiercest creatures in the known galaxy! But they’re about to bite off more than they can chew if they think they can go toe-to-paw against the shortest Guardian with the biggest gun!

I’ve never been really into the Guardians of the Galaxy or Rocket Raccoon for that matter, but both the cosmic superhero team and the little furry guy are making a big splash right now. Of course you’d expect that with the new movie that’ll be joining the Marvel Cinematic Universe this Summer and all the merchandising and promotion that Marvel is slinging behind it.

Still, a Rocket solo book has to be a little bit of a risk. We’re not talking about anything all that close to a big name here and I have to believe that, even with the movie, Rocket Raccoon is a minor interest for most fans. Hopefully the scripts by Skottie Young will be solid enough to captivate, and keep fans anchored to the comic for more than just a few issues.

Young will also be handling the art chores here. That you probably figured though since that’s what he’s really known for. He’s a perfect fit in that role as he is kind of an old pro at drawing super-heroic animals you know. Rocket Raccoon #1 hits stands this July, which is just before the film lands in theaters, which is probably as good timing as you can get.

Jason's been knee deep in videogames since he was but a lad. Cutting his teeth on the pixely glory that was the Atari 2600, he's been hack'n'slashing and shoot'em'uping ever since. Mainly an FPS and action guy, Jason enjoys the occasional well crafted title from every genre.
@jason_tas
Previous The Hunger Games: Catching Fire hits just about everything this Friday
Next FPS Rougelike ‘Tower of Guns’ blasts GOG.com this week