Geralt comes to the comics world with a dark fantasy comic from Dark Horse Comics. 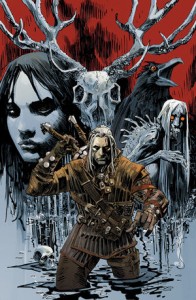 Not based on any of the games per say, Dark Horse Comics’ The Witcher is an all-new tale set in the realm of the popular RPG’s. With two games already on consoles and a third on the way for this year, the series is only gaining in popularity and hit a chord with gamers who found themselves wrapped up in the mature stories that creators CD ProjektRed seem all too adept at telling.

For the comic, writer Paul Tobin and artist Joe Querio will be running along the same lines with a story that follows Geralt (The Witcher) as he meets up with a fisherman plagued with the visage of his dead wife. Her spirit haunts him and resides in a place called the House of Glass, a mysterious structure that “seems to have endless rooms, nothing to fill them with, and horror around every corner”.

From the looks of the preview strip (in the gallery below) that we were sent by the company, the book should appeal to fans of the character and those who just like a god ripping fantasy tale. And I don’t know why exactly, but I couldn’t help but think of Mike Mignola’s Hellboy universe as I read through the promo pages. Even thought he settings are radically different, it seems like the heavy supernatural tones and common talk between the characters kind of has that same flow as Mignola’s creation, which is no bad thing by any stretch of the imagination.

Querio’s art doesn’t hurt either as it conveys the bleak and somewhat oppressive feel of The Witcher’s world too. As a fan of the games, I’m looking forward to this one big time. Catch the first issue when The Witcher #1 arrives on the racks and digital distribution on March 19th from Dark Horse Comics.

Jason's been knee deep in videogames since he was but a lad. Cutting his teeth on the pixely glory that was the Atari 2600, he's been hack'n'slashing and shoot'em'uping ever since. Mainly an FPS and action guy, Jason enjoys the occasional well crafted title from every genre.
@jason_tas
Previous Duke Nukem goes to court as Gearbox sues 3D Realms
Next First Valiant Pullbox Preview debuts with Rai