Maybe one of the most hotly anticipated events in comics for 2014, the return of Valiant’s warrior from the future, Rai is almost here. Check out the full Pullbox Preview after the break and take a peek at the special edition that’s on the way to comic shops. 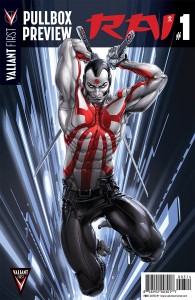 “Over the course of the past two years, Valiant has made it our mission to arm our retail partners with some of the very best promotional tools and incentives in the business. Now, with the highly anticipated Valiant First rollout set to begin this May with Rai #1, Valiant is redoubling its efforts yet again with the new Pullbox Preview program. Beginning this March, fans can head to their local retailer each month and pick up the first of many all-new, free looks inside the biggest Valiant releases of the year with our new Pullbox Preview promotional comics,” said Valiant Publisher Fred Pierce.

So what is a Pullbox Preview anyway? Well, it’s pretty simple and really cool. Pullbox Previews are a new series of promotional books that’ll be shipping from Valiant to the publisher’s top 500 retail partners. These books will be shrink-wrapped in packs of 20 and are meant to be distributed to subscribers (folks who add Valiant’s monthlies to their pullboxes, hence the name) or just patrons in general to get some more buzz going for the line.

The first such edition will be in stores right along side the fifth issue of Unity this March the 12th and will include a fully lettered preview of Rai #1 from Matt Kindt and Clayton Crain. But that’s not all as you’ll also get a peek at the first issue of Doug Braithwait’s upcoming Summer blockbuster Armor Hunters as well as a complete checklist for the mini-series and all its tie-ins. Valiant is promising “much more” inside the pack too, so these should be loaded up for fans.

Valiant is looking to hop up to the top of your weekly reading list in 2014 too with a massive expansion of their lineup. Not only will you be seeing the return of Rai and the debut of Armor Hunters, but the company will have no less that six new #1’s not he way for the calendar year. Here’s what the release schedule looks like so far:

The Pullbox Preview special editions will be sent out to stores (and can be reordered through Diamond) each month highlighting Valiant’s big releases, so make sure you check in as often as you can at your LCS. For Valiant Comics fans, 2014 is shaping up to be a big year indeed, and it’s just getting started.
Share

Jason's been knee deep in videogames since he was but a lad. Cutting his teeth on the pixely glory that was the Atari 2600, he's been hack'n'slashing and shoot'em'uping ever since. Mainly an FPS and action guy, Jason enjoys the occasional well crafted title from every genre.
@jason_tas
Previous The Witcher #1 (Comics) Preview
Next Castlevania: Lords of Shadow takes its final bow this week