You won’t find this particular version of Walt anywhere but the Toy Fair International in NYC and in super-small quantities on Mezco’s website. 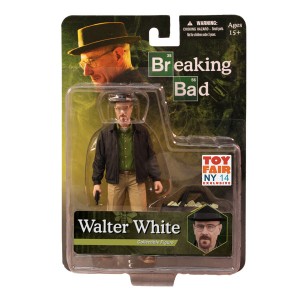 Relive the tense, edge of your seat excitement as Mezco’s Breaking Bad action figure stares at you from inside his collector friendly clamshell package, he dares you to make your move.

All Hail The King!

I think it’s pretty safe to call Sony Pictures series about the fall of a chemistry teacher and the drug trade in the American west a phenomenon at this point. The show has wrapped up with it’s final episode running on AMC last year, but fan fervor and internet chatter has in no way calmed down about it.

Love him or hate him, the main character Walter White is a big reason why. The ever increasingly ruthless family man who became a drug kingpin was a stunningly original character brought to life beautifully by actor Brian Cranston and really propelled Cranston (a longtime actor) into some big time notoriety.

This particular version of White is a Toy Fair exclusive item from Mezco Toyz, which means that only trade (read:people in the biz) will be able to get their hands on him at next week’s Toy Fair in New York at booth #4931. Now that doesn’t mean that the only safe haven will be eBay for BB fans who want one though. The toy-maker will be making a small quantity of the TFNY ’14 figures available on their website here. The price is a cool $80.00 USD, so this guy ain’t cheap, but what would expect from a figure that includes a bag of cash and a sack of blue crystals?

Jason's been knee deep in videogames since he was but a lad. Cutting his teeth on the pixely glory that was the Atari 2600, he's been hack'n'slashing and shoot'em'uping ever since. Mainly an FPS and action guy, Jason enjoys the occasional well crafted title from every genre.
@jason_tas
Previous How To Survive (PC) Review
Next Gas Guzzlers Extreme (PC) Review