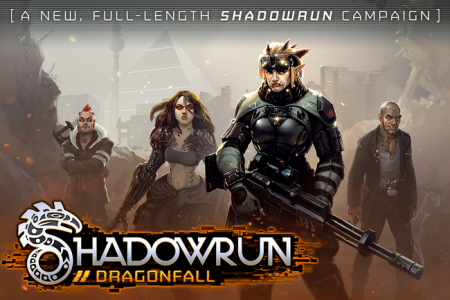 Dragonfall could probably be called a full-on sequel it’s so beefy. With a brand-new location and a ton of new stuff to do and see, this is one expansion pack that should make fans smile. And maybe belch fire. Maybe.

MAN MEETS MAGIC & MACHINE. The year is 2054. Magic has returned to the world, awakening powerful creatures of myth and legend. Unchecked advances in technology have blurred the line between man and machine. Great dragons play humanity for pawns, while ruthless corporations bleed the world dry. In this new reality of elves and trolls, corporate arcologies and terrifying new magics, anything is possible… for a price. And when the powerful and the desperate need a job done, they turn to shadowrunners: mercenaries, living on the fringes of society, surviving day-by-day on skill and instinct alone.

BERLIN. The Flux-State: a stable anarchy enforced by an ever-shifting coalition of megacorps, political factions, and savvy power players. A place where almost anything goes, and the right connections can be the difference between success and starvation. Dangerous jobs abound and there’s no better place to earn a quick payday – provided you live long enough to spend it. For you and your team of battle-scarred runners, it’s just another day in the Free City of Berlin.

But a new threat is rising, one that could mean untold chaos and devastation. The only clue: whispers of the DRAGONFALL, a long-forgotten event from the earliest days of the Awakened world. As you find yourself drawn into a maze of veiled dangers and strange machinations, you will come face-to-face with a grim spectre of the past… and alter the course of Berlin’s future.

That’s a lot to like and plenty to keep players busy. Personally, I’m happy just with the story expansion and the ‘save anywhere’ feature. Harebrained is putting a lot of love into Shadowrun’s rebirth and so far it;s been paying off with some incredible critical acclaim and fan reaction.

Shadowrun Dragonfall is available for preorder right now on both Steam and GOG.com and will cost you $14.99 USD. You’ll also need to have a copy of the original game to play it since this isn’t a real sequel, even though it really does kind of feel like one.

Jason's been knee deep in videogames since he was but a lad. Cutting his teeth on the pixely glory that was the Atari 2600, he's been hack'n'slashing and shoot'em'uping ever since. Mainly an FPS and action guy, Jason enjoys the occasional well crafted title from every genre.
@jason_tas
Previous GOG toasts 30 years of gaming with the Time Machine sale
Next Shadowman #15 (Comics) Preview