The longtime X-Man’s new solo book will feature one of the greatest X-Men writers of all time penning the scripts. 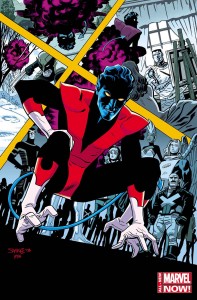 In many ways, Nightcrawler #1 represents a view of the modern day X-Men through the eyes of a past member who hasn’t been in the loop for a while. Remember that Kurt Wagner (Nightcrawler) has been out of commission in Hell (long story) and has no idea what the X-teams look like today.

As Marvel points out, Wolverine is the headmaster at the Jean Grey school, Cyclops is basically a fugitive and Professor X is dead. That’s a sharply different world than the one old Kurt left behind and one that should make for some very interesting reading for fans- especially lapsed ones. Casting Claremont as the lead writer is a nice move too as he wrote the X-Men in the golden age of the mutant team and is a huge fan favorite.

Both he and artist Todd Nauk are nothing but pumped to get into the X-verse as they both comment here on the character of Nightcrawler:

“He’s smart, tough, creative and daring, with an instinctive understanding of people and situations. He has a wicked sense of humor and a devastating charm,” says Claremont, in an interview with Marvel.com. ”His ‘normal’ is revolutionary to most people; throw him a problem, he’ll find a way to solve it that’s unique to him. He quite simply is the kind of man others trust; to know him is to have faith in him.”

“Nightcrawler has been one of my all-time favorite X-Men,” says artist Todd Nauck. “He’s a fun, cool character and he’s easy to care about. He’s a guy you root for.”

If you’re a longtime fan, this is one not to be missed. Bamf a copy into your collection when Nightcrawler #1 appears on the racks this coming April. And if you are one of those longtime fans, here’s a little something to tide you over in the form of a sneak-peek at Nauk’s concept art for Kurt’s look. 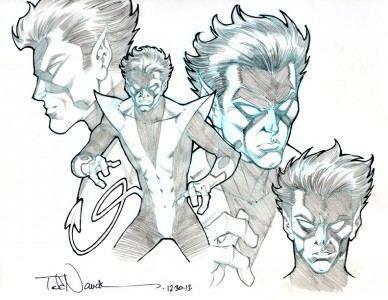 Jason's been knee deep in videogames since he was but a lad. Cutting his teeth on the pixely glory that was the Atari 2600, he's been hack'n'slashing and shoot'em'uping ever since. Mainly an FPS and action guy, Jason enjoys the occasional well crafted title from every genre.
@jason_tas
Previous Baldur’s Gate II Enhanced Edition now available on iOS
Next Wally West to return to The Flash as book gets new creative team