Ready to head back into the world of Baldur’s Gate? Beamdog and Overhaul Games’ redux of the PC role-playing classic is now available on the Apple iPad. 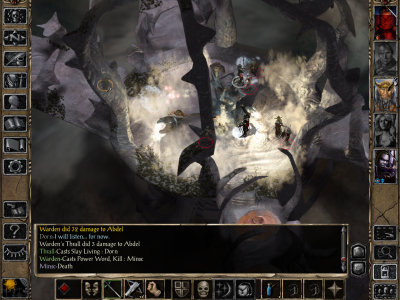 There are few PC RPG’s that had the massive following of the Baldur’s Gate series. Based on the Dungeons & Dragons medieval fantasy world, the games captivated with their action as much as their stunning attention to detail in recreating what really is one of the best loved properties of all time in D&D. The new revised version of the original game (well, the original game’s sequel) from Overhaul Games features a bunch of new stuff as well as the Shadows of Amn expansion pack and a completely HD-ified look.

If you’re already a fan (and if you like PC RPG’s, then you probably are) Baldur’s Gate II: Enhanced Edition is kind of a no-brainer. If you haven’t played the game in the past, then all you really have to know is that it’s far and away one of the best RPG’s (in any form) to hit the PC. Now that’s it’s on iOS too, you really have no excuse for not finally finishing that quest you never got to back in the day. After all, you can take this little epic just about anywhere you like now.

You can grab a copy of Baldur’s Gate II Enhanced Edition (which is already available on both the PC and Mac) on the iPad right now by clicking here. It’ll cost you $14.99 USD to buy the game itself with in-app purchases available for extra character portraits and more characters if you so desire (none of which are necessary to beat the game).

Jason's been knee deep in videogames since he was but a lad. Cutting his teeth on the pixely glory that was the Atari 2600, he's been hack'n'slashing and shoot'em'uping ever since. Mainly an FPS and action guy, Jason enjoys the occasional well crafted title from every genre.
@jason_tas
Previous Ms. Marvel #1 (Comics) Preview
Next X-Men great Chris Claremont returns to Marvel for Nightcrawler #1