Golden 3DSXL on the way for A Link Between Worlds launch

Nintendo’s newest Legend of Zelda title will have its own special 3DSXL when it launches in late November. 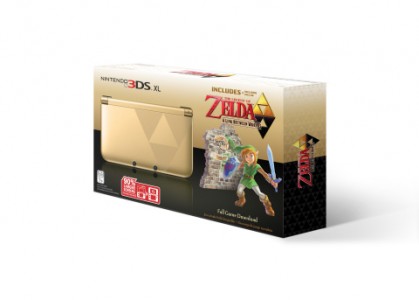 Much like the famed TriForce from the mythical land of Hyrule and the original The Legend of Zelda cartridge from the mystical land of the NES, the 3DSXL that’s on the way from Nintendo is pure gold… well, not real gold. But it is gold colored!

This particular jumbo version of the leading handheld console is actually half gold, half black. The dual color scheme is representative of the two different worlds that Link must traverse in the game (Hyrule and Lorule)- and it looks pretty darned snazzy too.

Bundle you say? No, this 3DS console isn’t flying solo as The Legend of Zelda: A Link Between Worlds is indeed included in the box. A download code that you can redeem on the eShop is included in the pack, so you can get to playing on your golden new console.

And that’s a download you can start on November 22nd by the way. That’s when both the stand-alone game and the special 3DSXL box set hit stores.

Jason's been knee deep in videogames since he was but a lad. Cutting his teeth on the pixely glory that was the Atari 2600, he's been hack'n'slashing and shoot'em'uping ever since. Mainly an FPS and action guy, Jason enjoys the occasional well crafted title from every genre.
@jason_tas
Previous Daedalic’s Blackguards coming to Steam Early Access
Next Steam bulks up to over 65 million registered users