With the excitement of Next-gen consoles fast approaching, I decided to think back to some of the games this current generation that had blown me away. Here’s the thing, I can’t think of a single game that has genuinely surprised me or made me think “wow, I’ve never seen anything like this done before”. At least, not in the mainstream, but why is that exactly? Well, there’s a simple answer to that question. 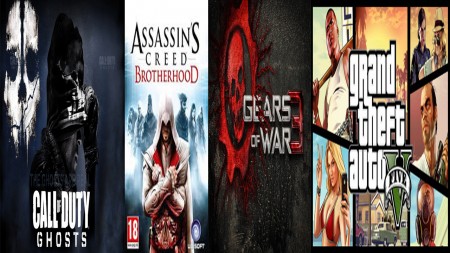 For the past couple of years now, we have been stuck with this soul-crushing status quo where we have yearly updates to pretty average if not bad games, also known as franchises, which are essentially what I normally call money milking cash cows. The greatest example and the biggest culprit out of them all is the overrated Call of Duty anti-gaming series (this should upset a few people.)

All we ever hear from the fanboys about this game is how great the multiplayer is, well that may be so, but please explain where the originality is in any of the games in the series. As far as I’m concerned, if you take away the multiplayer aspect of this title, then it is pretty much the same as every other First-Person Shooter released which, let’s face it, has been this current generations anthem so far.

I don’t know who came up with it or when the decision was made, but clearly someone thought it was a great idea to have an influx of generic FPS games- because hey, we haven’t had enough of those as it is so far have we? And the saddest thing about it all is that it looks like it’s going to be the exact same thing come next-gen. Apparently, one thing that we’ve always wanted to see in games was dogs and our prayers are answered, we finally get to step in dog faeces during the next installment in the awe-inspiring series from Infinity Ward. Not only do I get to step in dog excrement in the real world, I now get the opportunity to have that stench follow me around in the virtual world while being gunned down mercilessly.

Before all of you get the wrong idea about me here, there are also other games that milk their creations for all its worth, I honestly enjoyed the first Gears of War game, it was original (shh! Don’t mention Kill Switch) inventive, tried new things, but then the second one came out, which was… ok I guess, then we had the third which was just completely nonsensical. The storyline just kept getting more and more absurd to the point where you couldn’t really keep track of what was going on and then there was the rehashed gameplay mechanics, with little to no improvement. And as for Judgement, don’t even get me started on that one.

Moving on to my next target, I really liked playing the first two Assassins Creed games, the first one was a bit of a diamond in the rough which could have been better with some improvement and the second game did exactly that, but then the dreadful Brotherhood was released and it was evident that the developers stopped caring, because Assassins Creed was essentially a brand name at this point. And just when you think things couldn’t get any worse, we had Revelations with the pointless tower defense gimmick that had no real purpose to it. If anything, all it did was make a bad game even worse. I’d already given up hope by the time Assassins Creed III came out, but the silly naive side of me thought “maybe this time things will be different,” WRONG!!!!!!

It wasn’t; same gameplay mechanics, same glitches in the game, same framerate issues, the difference being that we have trees and ships this time. Now we have Pirates of the Caribbean….. Whoops! I mean Assassins Creed IV: Black Flag and to be honest with you, I don’t care anymore. It’s blatantly going to be the exact same thing as the previous installment, but this time, we get to play as Jack Sparrow.

Going way back to the release of the first Grand Theft Auto (that’s right, I’m going there) it was a game that had me hooked for ages, you want to know why? Because it didn’t take it self seriously, it was fun and that’s what gaming should be about, and now after a billion titles later (let’s not forget all those stupid spin-offs) GTA V is coming and let’s be completely honest here for a second, regardless of how good or bad the game turns out to be, it’s going to be a big seller and Rockstar are going to pull out the cigars and champagne to celebrate while laughing at those idiotic consumers buying into their cash cow. And that mainly comes down to the fact that it has Grand Theft Auto written on it. Yes that’s right, it has become a brand name, just like every other freaking franchised game and I’m getting sick of this endless cycle.

At one stage of my life, I absolutely loved both the Resident Evil and Silent Hill series of games, but then guess what happened? Capcom, a company seemingly run by idiots, completely forgot what the term survival-horror means and turned the series into a generic shooter (clearly we need more of those). I never really liked the first one, but two all the way to Resident Evil 4 (I’m including Code Veronica in there as well) were all masterpieces in their own right.

The fifth game was an imitation of the fourth, albeit, lacking the innovation of the previous game and six was just horrible, I played through Leon’s campaign hoping it would end before I felt the need to throw myself out the window. Needless to say, I stopped playing it after that, with the realization that once again (yep, that’s right) another game has been turned into a brand name.

When people ask me “when was the first time you got truly scared while playing a game?” The first thing I always say is Silent Hill on the PSX. Although, it’s graphically outdated now, I remember the game being scary to the point where I’d play it for a couple of minutes then quickly switch to Crash Bandicoot (don’t judge my happy place.) What made the game so scary was the atmosphere and soundtrack rather than scary monsters jumping out at you or reliance on cheap jumpscares which many games do these days.

The second game in my opinion was the best in the series because of this, Silent Hill 2 was  essentially a masterpiece in survival-horror. The third was pretty good as well; and despite the character in Silent Hill 4: The Room needing a personality transplant, it was a solid entry in the series. Then things went wrong when Konami decided to hand the reigns over to a bunch of bumbling idiots who decided to make the game more combat oriented.

One thing I enjoy doing in my spare time is watching ‘let’s play’ videos on YouTube, and my favourite YouTube personality at the moment is the Queen of the let’s plays herself, MangaMinx. “What’s this got to do with anything?” you must be thinking; well she made a video quite some time ago about franchises which you can check out here and I highly recommend you do. She is one of the few people around who actually has the guts to speak out on this matter and pretty much hits the nail on the head with most of her points. There is quite a bit of cursing involved in there so don’t say I didn’t warn you.

Before all of you start thinking this is my one man crusade against mainstream companies, it isn’t. That’s because I don’t just blame the companies for the poor state of the industry, I blame you consumers as well for putting all this money into franchises without even sitting there and questioning “hang on a minute, this is the exact same piece of trash from last time, except it’s repackaged under a different label”. And those of you that do question what’s going on, you still end up paying for the next installment, and the one after that, and the one after that.

How are these developers and publishers supposed to learn if they keep profiting from churning out trash on a regular basis? This is the exact reason I turned to indie gaming some time ago, there is so much more originality, creativity, and innovation going on ‘down there’. Just recently I started playing a game called Dust: an Elysian Tail and it just absolutely blew my mind away. For the first time in ages I felt like a child again and I’m trying my best to remember the last time I spent so many hours on one game. There is a big difference in mentality between indie and mainstream, indie developers value and view us all as gamers, mainstream developers view us all as consumers and that’s where the problem lies.

Is there a solution to this problem? Well, yes there is- one solution would be for all consumers to finally open their eyes and say “no more, we’re tired of this same old expletive”. Stop wasting your money on brand name games and watch how they’re forced to start working hard and coming up with original ideas. But let’s be realistic here, that’s never going to happen because people are too satisfied with playing the same old trash and wasting their money. Another solution would be to make a law that prevents developers from making more than two sequels, if those two sequels are as consistent in quality as the first, then maybe you can think about making another one.

But hey, these are all fairytale scenarios which will never happen.

Editor’s Note: The ideas expressed in Brutal Gamer Features do not necessarily represent those of Brutal Gamer, it’s editorial staff, or its writers and are the opinions of the individual authors. That said, we still believe freedom of speech is a beautiful thing.

I've been a gamer since I was a child (which is going way back when) the very first console I owned was the Sega Master System, during my time as a gamer I have pretty much come across nearly every console including the Bally Astrocade(which requiered cassette tapes to play games) so I have broad range of knowledge when it comes to video games. My favourite game of all time is between Shadow Hearts (a rare gem of an RPG released for the Playstation 2) and Final Fantasy VIII.
Previous Petition Created To Call For Restoration Of Original Xbox One Policies
Next Dead or Alive 5 Ultimate gets pre-order bonuses

It is December, isn’t it? It’s a little hard to tell, since the amount of …