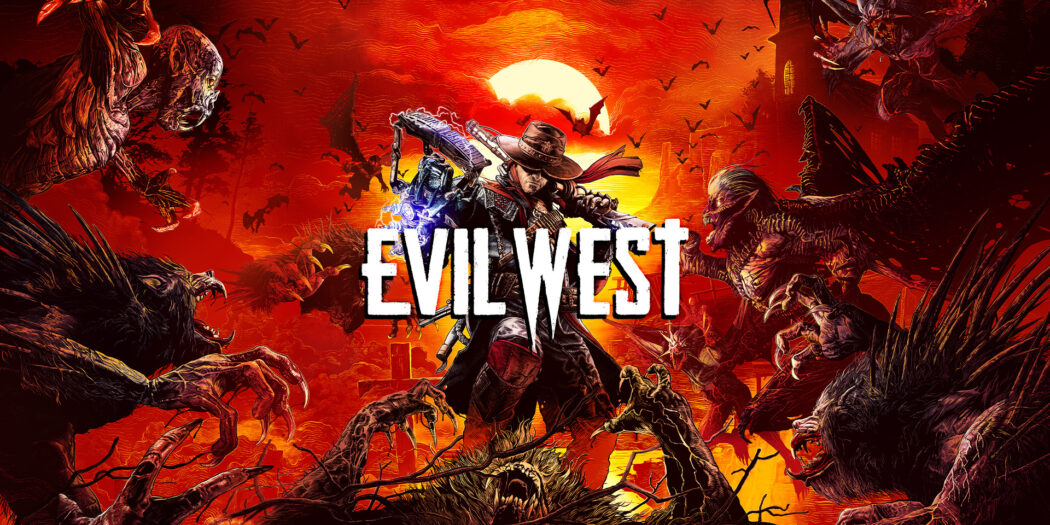 You might know Flying Wild Hog best from the Shadow Warrior series. It’s pretty easily the developer’s biggest name, with a trio of pretty great games included. Not that it’s the only thing that FWH has worked on though, ’cause there are plenty more, and they’re. not all FPS’.

There’s also the lootin’, shootin’ Space Punks, the hard-boiled, cyberpunk FPS Hard Reset, the excellent side-scrolling Trek to Yomi, and more. Bottom line, the company is not afraid to try something different, and that’s sort of true with Evil West. Yes, it’s a game that’s got a lot of guns-a-blazing, but it’s also more than that.

Flying Wild Hog’s newest is a third-person action title that melds gruesome vampire-horror with melee combat, and western-style gunplay and themes. While some off that might not seem all that ‘new’, the way that it’s done in this game is fairly novel. Evil West does some things with both of its main themes that just hasn’t been done before, and it’s very much worth a look for fans of either.

The storyline in Evil West is honestly a little complicated. I don’t mean convoluted, but there’s a lot going on nonetheless. Evil West’s universe is framed by a straightforward good vs evil narrative for sure. But even so, the story does wind around a bit, and includes some sick ideas. I mean that in a good way.

When things open up, we’re introduced to Jesse Rentier and his war-veteran friend Edgar Gravenor. They’re gunslingers. Well, they are if you accept that a person can be called that while using said hardware against vampires (and other nasties).

Both men are a part of the Rentier Institute, a place run by Jesse’s father with the singular mission of holding back the tide of evil. Though some know the Institute, it’s still a somewhat shadowy group, operating via small offices throughout the nation.

And in Evil West’s world, they need as many agents as possible.

The creatures the Institute battles are comprised of ancient horrors that stalk the shadows and live on the fringes of society. Vampires, werewolves, and all manner of other sickening creatures that live off the blood of mankind are pervasive in the game’s universe.

Take Peter D’Bano and his ‘daughter’, for example. An elder vamp, or Sanguisuge (as they’re known in Evil West), D’Bano conflicts with the other members of his species’ elite class. Despite the fact that their numbers are dwarfed by humanity, D’Bano wants to openly attack. That would start with the United States, with only the Institute standing in their way. But while he might sound like the main antagonist from all of this, it’s actually his daughter, who takes up his cause.

I don’t want to say too much here, because the story behind Evil West is pretty darn cool. Yes it’s ‘action’ fare, but as I mentioned, Flying Wild Hog really does a great job adding in a ton of cool vampire lore, and some legitimately cool twists. There’s so much at times, that you’ll only see certain elements once or twice, with some of it never explained at all.

But that can be a good thing. A little mystery is intriguing after all, and as it stands Evil West’s story is terrifically done all around. That includes a great cast with actors Derek Hagen as Jesse, Damien Lynch as Edgar, Emma Ballantine, John Chancer, Brian Protheroe, and Kerry Shale (among others).

There are a lot of options when it comes to combat in Evil West. The game sports an overflowing arsenal of weaponry, plus a pretty deep melee combat system, that makes use of the Rentier Institute’s innovative and electrically-powered gauntlet.

The gauntlet could have easily been the sole focus of the game’s action, as it has a fantastic spread of abilities (and looks really cool). This unique piece of hardware has electrical arcs that can slam enemies to the ground, a superhero-punch that can send out shockwaves, and an electrical shield. But as great as it may be, if Flying Wild Hog made that the focus they’d have had to leave out the staples of the wild west. Those include standard six-shooters, rifles, and shotguns. Not that they have to stay standard.

Skill and upgrade trees exist for all of the above, allowing players to boost their weapons and refine their powers to fit their own play-style. Some of the weapons can really get some impressive evolutions too, like the rife ending its line by becoming a freaking railgun. Oh, and if you don’t love the way you’ve taken things, you’ll find several stations throughout the game’s levels, where you can reset everything.

In the end, I feel like a loadout system might have been the better way to go, since having access to all of that stuff ll of the time can be a little overwhelming. But I’m also not going to pretend that it’s not incredibly cool stuff that’s a blast to wield.

I do have a much bigger gripe about Evil West though, and it’s how the levels themselves are constructed. They’re all filled with arena battles.

Feeling a little… boxed in

This particular design choice was a big part of Flying Wild Hog’s Shadow Warrior 3 as well, but while there were a handful of exceptions in that game, almost all of Evil West’s encounters are walled-in fights. Spot an enemy in the distance? You probably can’t attack them, since you’re not in the zone yet. You have to drop in and then you can have at ’em.

I will say that the theme does make for some tense battles. Since you can’t high-tail it if you get in trouble, you’ll be rolling and dodging, and hitting health packs to survive. But even so, I would have greatly preferred something a little more open.

Part of ‘why’ is that the levels in Evil West are some of the coolest and best-designed I’ve seen in a while. It would have been cool to have spent time fighting in some areas that weren’t clearly designated or designed as battlefields.

Speaking of those looks

Okay, so I had some issues with some parts of Evil West. But man, if you’re looking for a pretty title, this one’s got that in spades. Evil West is bloody, brutal, and gore-soaked, and all of that violent bloodletting looks absolutely fantastic.

But despite all of the red stuff, the game’s world isn’t 100% realistic-looking. It does have a somewhat ‘real’ edge to it, but the visuals are clearly stylized and a bit cartoony. That’s evidenced by the character models more than the actual levels themselves, and it looks pretty terrific.

While some of the animation can be a little bit stiff, the characters look great and are pretty darn memorable. Jesse and Edgar are standouts, but they all look great with loads of personality and cool little details.

Same goes for the bestiary, which is packed with flat-out awesome ideas. Not that I want to repeat myself, but there’s just so much great imagination in this game’s set of enemies. Some of that plays off of Native-American mythos, as well as things that may or may not have actually been found out there in the Wild West (like the remains of giants).

And that’s not even touching on the horrors that are scratch-built by the way. I mean, the majority vampire-underlings you fight are covered with giant leeches that hold blood for use by highborn Sanguisuges. That’s gross in all the right ways.

As for those stages too, they’re all pretty great. I can’t think of a bad one, and the variation is freaking fantastic. Evil West has snowy landscapes, old mansions, swamps, forests, deserts, mountains, and almost anything else you can think of that’d fit the time-period. Much like with the characters too, the attention to detail is top-drawer. A lot of care went into the visuals of Evil West, and you can tell.

I liked Evil West a lot, even though I had some issues with specific parts of it. It mostly does everything right outside of the arena-happy combat, so if you’re looking to end the year with a little bit of horror and vampire-slaying, it’s more than worth a play.

Take a bite out of the old west

Evil West might be one of the biggest surprises of the year for me. The game plays great, looks and sounds great, and has some of the flat-out coolest new vampire-related ideas I've seen in any medium. Couple that with a great story and not even the somewhat monotonous 'arena' fights can detract all that much.

Jason's been knee deep in videogames since he was but a lad. Cutting his teeth on the pixely glory that was the Atari 2600, he's been hack'n'slashing and shoot'em'uping ever since. Mainly an FPS and action guy, Jason enjoys the occasional well crafted title from every genre.
@jason_tas
Previous Video: Unbox a movie legend with Sideshow’s look at Dirty Harry
Next Top Gun: Maverick blasts onto Paramount+