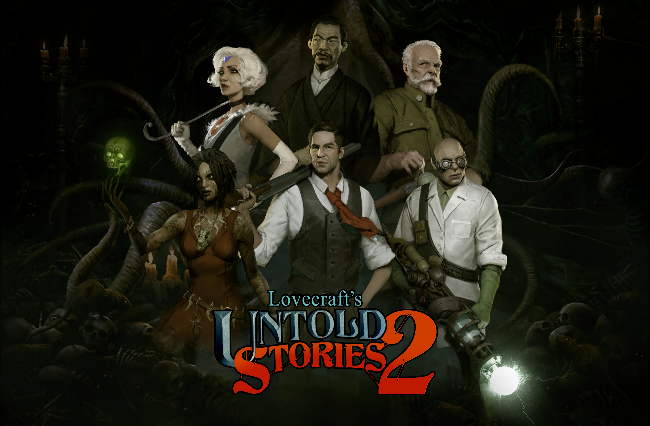 BG actually published a review of the original Lovecraft’s Untold Stories just a few weeks ago. It’s a fun game, with a terrific 16bit(ish), retro look and some slick twin-stick(again, ‘ish’) gameplay.

We caught up on that review while the sequel, Lovecraft’s Untold Stories 2, was delayed. Now that wait is over though, as the title arrived last month, with a significantly changed formula.

Gone are the SNES-style looks, but that’s not all. The gameplay is a little different as well, and developer Blini has added some significant new elements, and also dialed up the difficulty.

What’s the same though, is that the game keeps its Lovecraftian feel. It’s just that this time it might drive you a little… mad.

Yes, this is a continuation of the first Lovecraft’s Untold Stories. Actually, vets of that game will find that there are number of holdovers, and a kinda/sorta flow where part 2 picks up the narrative.

A number of the playable heroes are back, including the Detective, the Witch, and the Professor. They’re joined by the Medium (not Patricia Arquette), the Veteran, and the Alienist. These aren’t just for show either, as each class plays differently and has access to its own items and equipment.

Not that finding that gear is exclusive, as (for example) the Detective will find stuff that the Witch can use. If that happens, it’s kind of up to you whether you want to sell it off or stow it, flipping over to a new character and outfitting them properly. But let’s get back to the story. It’s straightforward for sure, and not the deepest of things (no pun intended).

When things start out, your character has been institutionalized. But of course, things aren’t what they seem, and his or her surroundings go sideways fast. From there, you’ll find yourself on the trail of an artist whose work has odd and often deadly effects on people.

Unfortunately this isn’t really explored as well as I would have liked. LUS2 just kind of lays its story over the top of the action. Whereas I loved the approach of the original, it feels like developer Blini could have done a lot more this time around. They do describe it as an ‘action RPG’ after all, and the new and more detailed look would lend itself nicely to a pumped up narrative.

If you’ve played a twin-stick shooter before, you’ll immediately know how to get into the action with Lovecraft’s Untold Stories 2. No matter who your character is, you’ll move with the left stick and attack with the right. Simple. Kinda.

While the basic play is easy to learn, it also throws a few monkey wrenches into things. For starters, you cannot just hold down the right stick and fire into infinity. For that matter, to reload your weapon you’ll actually have to let go of the right stick, or you’ll get a little message telling you to reload. Making things even more difficult is that, if you use your dodge move, your reload will be reset.

This can be maddening in the midst of a pitched battle against incredible odds. And if you’re not fast enough, you just might not make it out alive. That’s actually a big change from the first game; the difficulty.

Lovecraft’s Untold Stories wasn’t blisteringly tough. It was fun, and I thought very well-paced, with plenty of action, but didn’t overwhelm. That’s not so here. Part 2 is much tougher, and that goes for whatever form of enemy your battling.

Angry cultists, mad dock workers, fish-men, and nasty little crabs (yes, crabs) can all present a difficult time. And if they’re in groups, they can be downright deadly, and fast. Some of these fights basically turn into finding out if you can get away and keep all the baddies running in a circle long enough to pick ’em all off.

Most of the above move at varying speeds and attack in different ways, and so managing even a comparatively mild fight can get difficult. Fortunately you have a selection of items at your disposal, including health packs and bandages. Unfortunately, it can be tough to heal, administer antidotes, or use those bandages effectively, since (again) combat is frenzied.

Bottom line, make sure you’re healed up and have your equipment slots memorized for fast button-pressing before you engage. ‘Cause while you can restart a level if you’re killed, you’ll lose all of your stuff and progress.

Speaking of “stuff” though, the game has a brand new element with crafting. Not present in the prequel, Lovecraft’s Untold Stories 2 has players finding lots and lots (and lots) of scrap during their missions. These seemingly random parts can then be combined to make brand new items and equipment.

Yeah something’s different alright, and it’s immediately obvious what it is if you played the original Lovecraft’s Untold Stories. While it’s still procedurally generated, the sequel looks almost completely different, and whether that’s good or not is kind of up to your own taste. Personally, I loved the original look of the game, and wasn’t completely sold on the sequel’s revamp. After playing it, I still have some issues.

Blini Games chucked the pixel art, and brought in a smoother and slicker ‘comic book’ aesthetic. That makes the game look arguably better in a few ways, with some decent animation and way more detail overall.

If that sounds good, it can be, but I liked the original feel a lot better. That game had a charm to it, and a personality that the sequel just doesn’t. LUS2’s presentation can be a little strange in parts too, and I don’t mean in a cosmic sense.

Yes, the overall look is more detailed and at times beautifully so, but the animation can sometimes looks antiquated too. Characters move stiffly, and the art on the inventory screen reminds me of something that we might’ve seen in the 90s.

I suppose it’d be safe to say it’s a bit hit and miss.

Lovecraft’s Untold Stories 2 improves on the original in a few ways, adding things to do and redefining the visuals. Developer Blini Games certainly wasn’t afraid to shake up the formula, that’s for sure.

If you’re looking for a tough battle against the forces of evil that looks like it just tumbled out of a comic book, it just might hit the target. But on the flip side, there’s a lot that could have been better in this go-around with the old ones, and its forebear might still be your better option.

Up from the deep

Lovecraft's Untold Stories 2 ditches the 16bit look the original for a more cartoony one. It also tweaks the game in a few other ways, adding in more enemy types, new characters to play as, an overmap, and a creepy story that continues the first game's universe. Oh, and it's tough. Really tough. Fortunately it's also plenty fun, and has that rare 'one more game' quality to it. If you're into any or all of the above, it deserves a look.

Jason's been knee deep in videogames since he was but a lad. Cutting his teeth on the pixely glory that was the Atari 2600, he's been hack'n'slashing and shoot'em'uping ever since. Mainly an FPS and action guy, Jason enjoys the occasional well crafted title from every genre.
@jason_tas
Previous Trailer: Gotham Knights gets one last look before launch
Next Trailer: Space Tail brings a lost dog-stronaut home