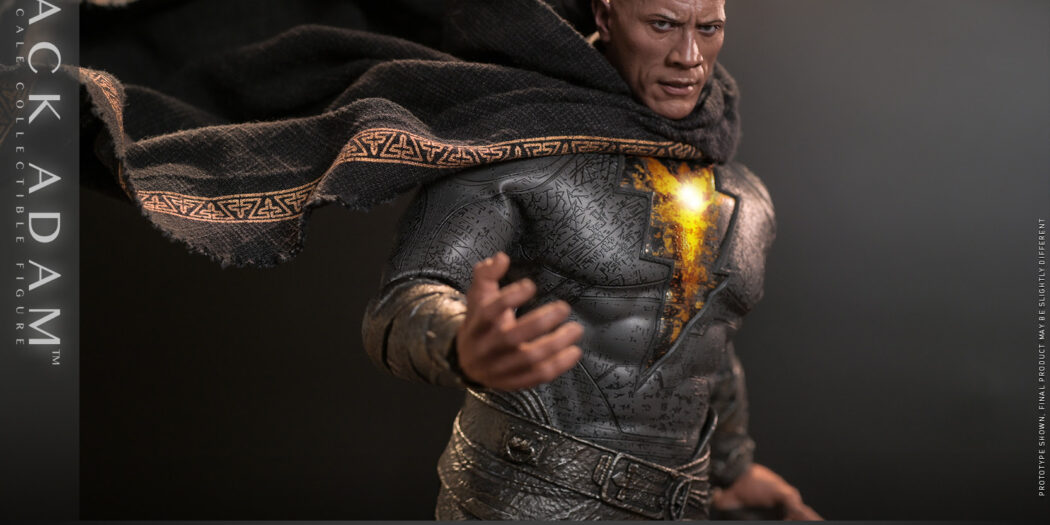 DC Comics heroes and villains don’t have much more complex origins than the man called Black Adam. And I mean that both in terms of the actual character’s origins and evolutions, and his real-world journey from the printed page to the big screen.

While Adam has been a villain, a ruler, and a hard-edged hero, he’s also had quite the trip making it to Hollywood. With the movie finally due out this month, Dwayne Johnson’s portrayal went through years in movie-purgatory before being green-lit. But though he’s taken a while to get here, Black Adam’s film looks like it might be a winner, with plenty of praise for early looks and trailers. So, of course, there’s gonna be merch.

And also ‘of course’, the best looking piece of that comes from Hot Toys. The high end collectible company has made a habit of cranking out some of the most detailed and accurate versions of on-screen characters, and Adam is another in that list.

Have a look I the gallery below, but be warned because there are actually a few spoilers included.

Now, about those “spoilers”, though you probably noticed them already. Bottom line, some of those images above have a lot more ‘gold’ happening than others. Presumably, those allude to an alteration that will happen during the course of the film, but it’s not elaborated on in the press release.

As you can clearly see though, the lightning bolt emblem and the electricity accessories are changed, and the costume’s highlights are in gold instead of black. I’ll leave it up to you to speculate what that might mean. Know though, that these are two different figures.

The standard version, which is actually called the “Deluxe Edition”, is the one that includes the blue bolts and black accents. That’s while the “Golden Armor” version includes the… golden armor, and yellow lightning. That’s in addition to an extra Dwayne Johnson portrait. Both editions are $360 USD, so you get a decent little extra and the more comics-accurate look for the same price.

Brekdowns and links are below

The Deluxe version of the Black Adam 1/6 scale figure contains all of the features and accessories described above, but also includes an additional swap-out portrait of Dwayne Johnson as Black Adam, as well as a highly elaborate diorama display base. The base depicts the wreckage of a destroyed historic site with additional accessories that are attachable to the figure’s body, creating a powerful and eye-catching centerpiece to any DC collection!

The Black Adam (Deluxe) 1/6 Scale Figure is available to pre-order now, via Sideshow.

He is unstoppable! Add the Black Adam (Golden Armor) figure to your DC figure collection! Available to pre-order now, via Sideshow.

Jason's been knee deep in videogames since he was but a lad. Cutting his teeth on the pixely glory that was the Atari 2600, he's been hack'n'slashing and shoot'em'uping ever since. Mainly an FPS and action guy, Jason enjoys the occasional well crafted title from every genre.
@jason_tas
Previous NYCC 22: DST and Gentle Giant plan out a big Con with lots of exclusives
Next Alex Ross returns with a sequel to Marvel’s Timeless