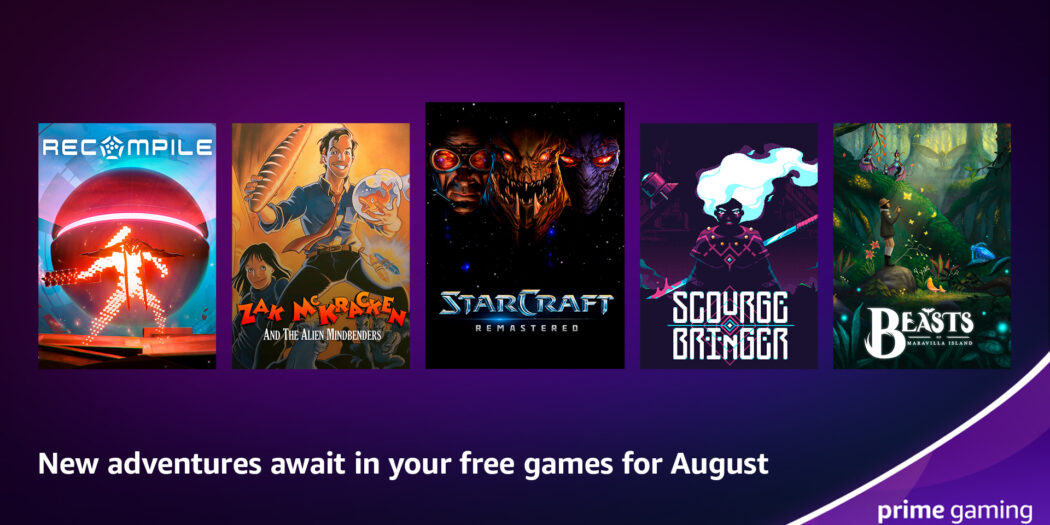 A nice selection of PC games round out the summer for Amazon Prime Gaming subscribers, with StarCraft Remastered, Recompile, and more.

Man I can’t wait for fall

It’s been a long, hot summer for most of the US, and while some of the most uncomfortable days are still ahead, it’s also almost over. Yep, it’s August, and that means Halloween decorations and pumpkin-flavored everything starting to show up in stores. August also brings the very beginning of the fall/Holiday video game release window.

But before we get to that, and it is definitely coming, there’s the little matter of some free games. Well, there is if you’re a Prime Gaming subscriber anyway. And let’s be honest, if you play on a PC, that should probably be you.

This month, Amazon is handing out some pretty slick games to subscribers. They include the hip-to-hate StarCraft Remastered, as well as classic (and seldom seen) adventure title Zak McKracken, and the gorgeous Tron-like shooter Recompile.

Of course, as subscribers know very well, there’s a lot more to Prime Gaming than just a selection of monthly freebies. There’s also the rotating collection of monthly games that can be streamed from Luna, and a ton of DLCs.

As you saw above in the trailer, the Luna offerings for August are pretty terrific. They include former Game of the Year Control’s Ultimate Edition, 16bitish side-scrolling action title Steel Assault, all-time classic Myst, and the underrated Garfield Kart.

Jason's been knee deep in videogames since he was but a lad. Cutting his teeth on the pixely glory that was the Atari 2600, he's been hack'n'slashing and shoot'em'uping ever since. Mainly an FPS and action guy, Jason enjoys the occasional well crafted title from every genre.
@jason_tas
Previous Unbox Hot Toys’ new Dark Trooper, set to ship this quarter
Next The latest free update for Dying Light 2 brings new quest and more