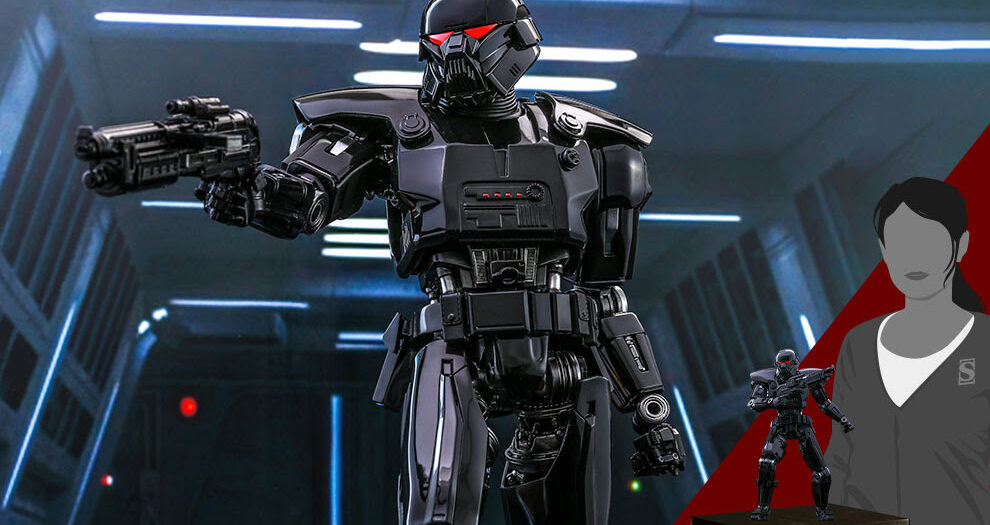 One of the big surprises from season 2 of The Mandalorian, and hailing from the Star Wars: Dark Forces game, the Dark Troopers are almost here.

I get it, there were bigger surprises in The Mandalorian’s second season than the Dark Troopers. But as a Dark Forces fan from way back, they were pretty awesome to see.

If you don’t know, the Dark Troopers seen in the show were the third evolution of the Imperial super-soldiers. The first were basically Stormtroopers in ridiculously powerful armor, which is what we saw in the game So with that, The Mandalorian leaned quite a few degrees into making Dark Forces kinda/sorta canon.

The designs were wickedly cool too, with a definite nod to the originals, but with an even more mechanical look overall. And of course, Hot Toys pocked up that ball and ran with it.

The company’s Dark Troopers were announced last year, but are finally (almost) ready to ship. And to go with that launch window, retailing partner Sideshow Toys has created a neat little unboxing for fans to check out.

Inspired by Moff Gideon’s™ elite team of third-generation battle droids, as seen in The Mandalorian™, the Dark Trooper 1/6 Scale Figure is a formidable addition to any Star Wars collection.

The sleek design features glossy black armor with metallic silver detailing and a meticulously crafted helmet with light-up LED eyes. The highly detailed Dark Trooper 1/6 Scale Figure is equipped with a blaster rifle and also comes with a variety of hands for a wide range of posing options.

Dark Trooper pre-orders are still open, despite being on the eve of shipping. So if you want one, you can still secure one for yourself by clicking here. The Dark Troopers are priced in at $260 USD, and are set to ship out some time from now through September.

Jason's been knee deep in videogames since he was but a lad. Cutting his teeth on the pixely glory that was the Atari 2600, he's been hack'n'slashing and shoot'em'uping ever since. Mainly an FPS and action guy, Jason enjoys the occasional well crafted title from every genre.
@jason_tas
Previous Tobey McGuire’s Spider-Man gets a brand new Hot Toys figure for No Way Home
Next August’s Prime Gaming freebies include Starcraft, Recompile, and more