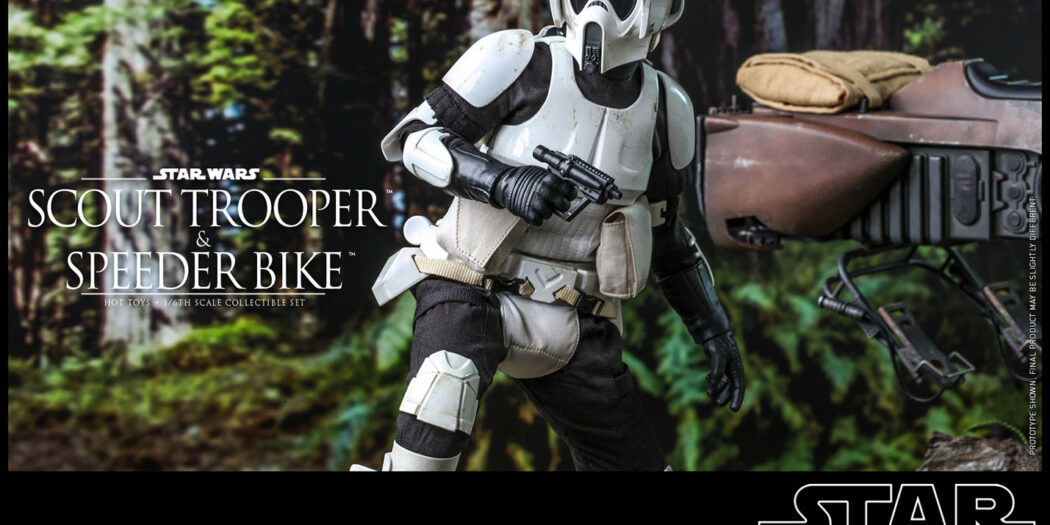 One of the biggest fan-favorite troop types from the original Star Wars trilogy, the Imperial Scout Trooper is coming up from Hot Toys.

First seen on the forest moon of Endor in Return of the Jedi, the Imperial Scout Trooper fast became a fan-favorite. At the time of course, there weren’t many standard soldier variants in the Empire’s army, so getting something different was particularly cool. But even so, the decades since RotJ’s release haven’t really dulled the appeal of the ‘biker Scout’.

As the latest entry in Hot Toys’ 12″ Star Wars line, this fast-moving trooper is about to get a new and revised figure. Well, actually ‘figure set‘ might be more appropriate, since he’ll come packed with his signature Speeder Bike.

Have a look as Sideshow Toys takes a deeper look, in the company’s latest unboxing:

The highly accurate Star Wars™ Scout Trooper collectible figure is based on the character’s appearance during the thrilling speeder bike sequences in Star Wars: Return of the Jedi™. It features a newly developed helmet and armor with weathered effects, a finely tailored fabric bodysuit, a blaster pistol, and a blaster rifle. The articulated figure comes with a variety of gloved hands to allow for a range of pose options.

The expertly crafted Speeder Bike showcases the technical details of the vehicle with meticulous paint application, articulated foot pedals, steering vane, and engine flaps — all of which allow for a variety of poses. It also comes with a cargo bag and a themed display stand reminiscent of the terrain on Endor™.

Looking great and coming up fast, the Scout Trooper and Speeder Bike set is set for release in quarter 3, 2022. That means he could be shipping out any time between now and September. That does not mean that pre-orders aren’t still open though.

You can still grab one of those here, via Sideshow’s online shop. The set is priced in at $505 USD.

Jason's been knee deep in videogames since he was but a lad. Cutting his teeth on the pixely glory that was the Atari 2600, he's been hack'n'slashing and shoot'em'uping ever since. Mainly an FPS and action guy, Jason enjoys the occasional well crafted title from every genre.
@jason_tas
Previous Trailer: Starro runs amok in Batman & Superman: Battle of the Super Sons
Next Trailer: Toy Soldiers HD blasting onto Nintendo Switch this August