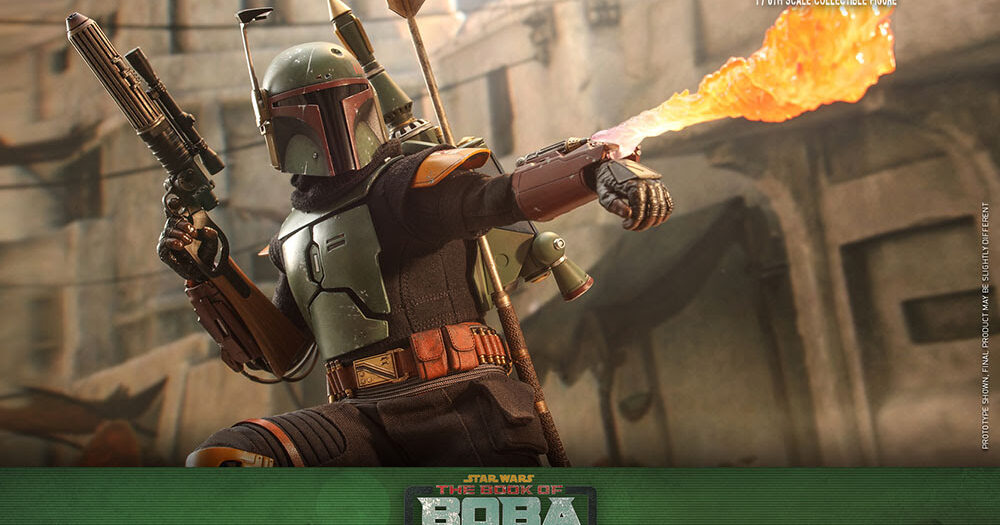 The Book of Boba Fett is still being written, but one of the best figure you’re likely to see spin out of the Disney+ show is coming up from Hot Toys.

Boba Fett fans have had a long and often disappointing road in Star Wars. A standout character from the original trilogy, Fett had little screen time and seemingly died in Return of the Jedi. Since then though, we’ve seen quite a bit of the bounty hunter thanks to his Disney-era resurrection.

Turns out that Boba didn’t die in the jaws of the Sarlacc after all, and made it out to forge a new life for himself. That story played out across The Mandalorian’s second season, and was greatly expanded upon in The Book of Boba Fett. And that latter show is where Hot Toys’ latest figure spins out of.

Clad in his black uniform and traditional armor, Fett is loaded with accessories and should fit right in with companion pieces Fennec Shand and Cad Bane.

This collectible figure features an ultra-detailed and meticulously weathered helmet and armor, as well as a finely tailored fabric undersuit, a jetpack, a blaster pistol, a grappling hook, a blaster rifle, a gaffi stick™, and more!

Ready for pre-order right now via Sideshow Toys, Boba Fett is scheduled to ship in the second half of 2023. He’s priced in at $275 USD.

Jason's been knee deep in videogames since he was but a lad. Cutting his teeth on the pixely glory that was the Atari 2600, he's been hack'n'slashing and shoot'em'uping ever since. Mainly an FPS and action guy, Jason enjoys the occasional well crafted title from every genre.
@jason_tas
Previous Trailer: Get a better look at this September’s Evil West in blood-soaked action
Next Trailer: Get a look at the heaping helping of fresh content coming to Call of Duty this week