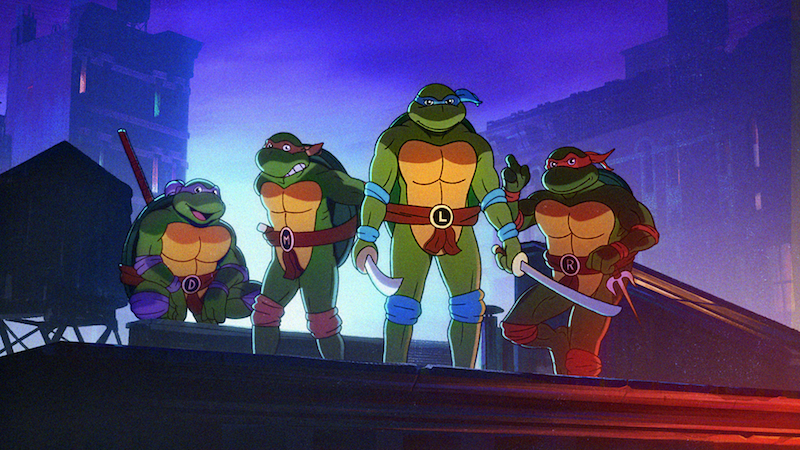 Dotemu and Tribute Games’ reel back the decades to the best days of TMNT video games. The result is the best beat ’em up since Streets of Rage 4.

If you existed back in the early to mid-90s, you probably have a very specific set of side-scrolling beat ’em ups pegged as favorites. It kind of all depended on what kind of gamer you were. If you were a Super Nintendo fan, you’d probably name Final Fight. More of a Genesis player? Then you might say Streets of Rage.

But along with those headliners, there was one other set of games that stood out. One series, banking on a massive property, had hits both the arcades and at home, and really never produced a dud. Of course I’m talking about Teenage Mutant Ninja Turtles. There was the original Arcade Game, Turtles in Time, and the NES/SNES/Genesis games, and really all of them were good fun. It was a star-studded history for the TMNT, but one that came to an end after the 16bit era.

For some reason, that was as long as the Turtles heyday lasted. But now after decades of terrible to middling video games, Dotemu and Tribute Games are bringing the IP back to its golden age. And oh my are the Turtles are indeed back in style.

Shredder’s Revenge is a side-scroller that pays hefty homage to the past, while crafting a thoroughly modern, blade-brandishing brawl.

While Shredder’s Revenge is a pretty straightforward game, it does have a story. And it’s actually not a bad one either, as these kinds of games go, playing off of the classic TMNT cartoon.

Basically, Shredder is back in action once again, and NYC is in trouble. Mutants are on the move, Foot Soldiers are just about everywhere, it looks like the Turtles enemies are trying to reassemble Krang’s android body, and something odd is happening with the Statue of Liberty.

As they fight their way across the city, the Turtles run into old friends (and have to help ’em out), battle tons of classic enemies, and eat lots of pizza (natch’). If there’s a vehicle or character that you remember fondly from the old show, you’ll likely find it here in some form. That’s not to say that every character has a big part, or that you can actually pilot the Turtle Blimp, but loads of the toys you used to play with are present.

One note on that actually, as Shredder’s Revenge stocks all 4 Turtles, April, Splinter, and Casey as playable characters. But, and this is a big but, Casey is only playable once unlocked. And you have to beat the game for that. I found that to be a little disappointing.

But let’s get back to the good stuff, because there’s plenty. The campaign is playable solo, and plenty of fun that way. But there’s multiplayer as well, and you can be joined by up to 5 of your buddies for it. Yes, a six-player TMNT game, both online and couch co-op.

While the story mode is pretty clearly the pepperoni and meatballs here, there’s also an arcade offering. This added play-mode makes the game much harder, limiting lives and continues, and eschewing saves. In those ways it felt more like a ’16bit era’ version of Shredder’s Revenge to me than an “arcade” mode, but you get the drift.

If you’ve played a side-scrolling action title before, then you’ve played the basic game that Shredder’s Revenge is. While there are some things to do here that you wouldn’t find in most games years ago, it’s still a familiar experience. Left-to-right and all that.

Our heroes can attack, jump, taunt, and pull off their own specific super moves. They can also do special moves though, and perform those same grabs that we’ve seen before in TMNT arcade titles, complete with Mode 7.

So as you can see, there are some new elements, but you still won’t be left wondering what to do if you’ve ever played a game in the genre before. The game controls like a dream, and is fine-tuned to perfection. And if you are a little lost for some reason, just sit through the tutorial that plays before you dive in.

Along with the control suite, it’s also worth mentioning that there are power-ups and collectibles to find. The power-ups come in the form of pizza, sushi (not that the Turtles like it), and special pizzas that give buffs like super-power for a short time.

As for the collectible angle, those come into play once you find and release one of the supporting characters. Vernon, the Neutrinos, the Punk Frogs and more are all hidden across the game’s world. And once you find them, they’ll tale up a position on the over-map, and send you on quests for items like video tapes, crystals, and bugs, respectively.

These little hunts are never obtrusive, and I actually found everything that I needed to find without even looking. Seriously, if you’re the type of game fan who like smashing crates and seeing what’s under stuff, you will too.

How much did/do you love the classic Turtles? Is it’s a lot, and it is for me, then you are going to be absolutely in Heaven with this game. Tribute Games has basically taken that original show, and mutated it into a video game.

At first I was a little put off by the different visual style, as this isn’t a mimic of the original arcade titles. But once that wore off, and it wore off fast, I changed that tune completely. Yes, Shredder’s Revenge is kind of its own thing visually, but it’s also 100% a love letter to the show it’s based on.

The sound matches the look as well, with some awesome (though a little sparse) voice work. the original TMNT voices are great to hear once again, though of course the cast isn’t complete. After all, some of the actors aren’t with us any more. Still, the stand-ins work for the most part.

The music is terrific as well, with classically styled Turtles tunes galore. There are some actual songs with lyrics as well sprinkled in, though whether or not you enjoy those… well that’s up to you.

Can you tell how much I like this game? Yeah, it’s pretty obvious. Then again though, I am a massive TMNT fan, and a massive fan of the games that Shredder’s Revenge is based off of. And I can’t deny how awesome it is to see the Turtles back in action, in the genre that they’ve always worked best in.

Speaking purely as a critic though, I can’t differ much from the fanboy’s opinion. I’d only add that the game doesn’t do anything to shake up the genre at all, or try to work in some things other than beating foes into heaps. There are no branching paths, or puzzles to be solved. And then I’ve gotta mention too that it’s pretty short. If all you’re buying the game for is to play through it once, be aware that it’s only about 3 hours long.

But if that doesn’t scare you off, then know that TMNT: Shredder’s Revenge is a treat for Turtles fans who’ve been itching for a return to side-scrolling glory. It’s an absolute gem, and one that hard-shelled fans shouldn’t miss out on.

TMNT: Shredder's Revenge is a perfect return to form for the Turtles. It brings the IP back to its best genre, the side-scrolling beat 'em up. Shredder's Revenge is love letter that original Turtles era, and revels in nostalgia, while still delivering a fantastically fun ride that looks, sounds, and plays great. Yes, the game is pretty short, though if you're planning on replaying it often (and doing so with buddies in tow) that's not much of an issue.

Jason's been knee deep in videogames since he was but a lad. Cutting his teeth on the pixely glory that was the Atari 2600, he's been hack'n'slashing and shoot'em'uping ever since. Mainly an FPS and action guy, Jason enjoys the occasional well crafted title from every genre.
@jason_tas
Previous Trailer: The mark is back, as Zorro The Chronicles arrives on consoles and PC
Next Xenoblade Chronicles Nintendo Direct tomorrow